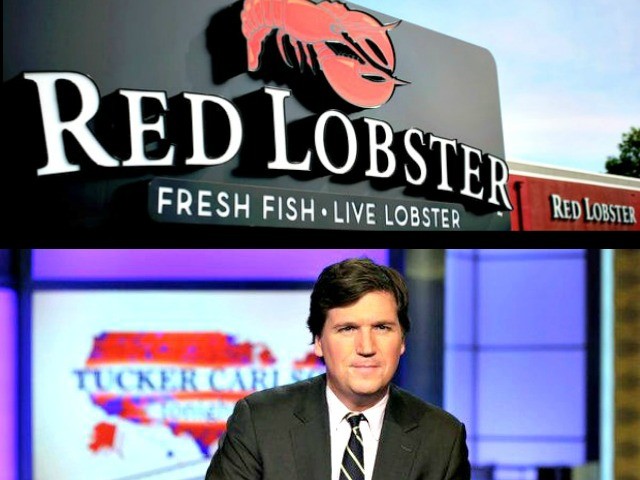 Restaurant chain Red Lobster is the latest company to cave to pressure from the far-left blacklisting campaign against Tucker Carlson, announcing Tuesday that they would no long advertise on Fox News’ Tucker Carlson Tonight.

“We reserve the right to make changes to our purchases when the dialogue is no longer in line with our criteria.”

Red Lobster is the latest company to pull ads from Carlson’s show. He faced an ad boycott last month over comments criticizing American immigration policy, and he is once again in the crosshairs of the far-left over comments he made about many women who do not want to marry men who earn less than them.

What in the cheddar bay biscuits is this? https://t.co/yZKHbUz6if

When reached for comment, a Fox News spokesperson referred Breitbart News to a previous statement.
The statement reads:

We cannot and will not allow voices like Tucker Carlson to be censored by agenda-driven intimidation efforts from the likes of Moveon.org, Media Matters and Sleeping Giants. Attempts were made last month to bully and terrorize Tucker and his family at their home. He is now once again being threatened via Twitter by far left activist groups with deeply political motives. While we do not advocate boycotts, these same groups never target other broadcasters and operate under a grossly hypocritical double standard given their intolerance to all opposing points of view.

Carlson has indeed faced vicious tactics from the left before. In November, his home, where his wife was home alone, was targeted by Antifa, a group notorious for its tactics of violence and intimidation.