Blinken became secretary of state following a confirmation hearing in which he asserted that he believed that China was guilty of genocide – in the case of the extermination of the Uyghur people of East Turkistan – but that America should have a “cooperative” relationship with the genocidal regime, anyway. His tenure has been marked by an extremely passive policy towards China characterized by Blinken himself allowing various Communist Party officials to berate him in public.

Blinken, Schweizer details, ran the University of Pennsylvania’s Biden Center for Diplomacy & Global Engagement while helping establish WestExec Advisors, a consultancy that debuted in 2017 with a group of top-level Obama administration officials at the helm. WestExec currently bills itself as a “strategic advisory firm that offers unique geopolitical and policy expertise to help business leaders make the best decisions in a complex and volatile international landscape.”

Last night, #PBC’s Managing Director @ABlinken kicked off the guest speaker series for @PennInDC’s foreign #policy course, “Today’s #Diplomacy: How Does It Really Work?” He spoke about challenges to international order & his view of the future of diplomacy. Thank you! pic.twitter.com/niulzBQVCB

The Biden Center launched the same year as WestExec was founded. While the firm targets corporate and businesses leaders today, at the time, Schweizer narrates, it specifically listed aid to “U.S. research universities” as among the services it offered.

According to an archived version of the site (which featured a photo of Blinken), WestExec helped unnamed “research universities” “continue to provide capability to and remain a trusted partner of the USG [U.S. government] while pursuing commercial activities in China.”

“WestExec listed this as one of their services on their website—until shortly before Joe Biden accepted the nomination for the presidency at the Democratic National Convention in August 2020,” Schweizer write. “Then they mysteriously deleted it.”

The founding of the Biden Center, Red-Handed elaborates, resulted in a windfall of donations coming from China for the University of Pennsylvania.

“After the Biden Center’s announcement that it was opening at the University of Pennsylvania, donations from the Chinese mainland to Penn almost tripled,” the book reveals. “In the three years before the announcement, the university received around $15 million. In the three years after, the total was close to $40 million.”

“The latter number is $60 million from China if you include contracts,” it concludes. While no public data exists on how much of those donations went to the Biden Center, a substantial percentage came from companies with ties to the Chinese Communist Party. As a communist regime, Beijing has a hand in nearly every corporate entity in the country.

Blinken’s history prior to leading the Biden Center also raises grave concerns about his stance towards China. In Red-Handed, Schweizer details a 2012 incident in which Blinken, advising then-Vice President Joe Biden, encouraged the U.S. government to deny political asylum to a Chinese Communist Party defector who could have been a priceless intelligence asset for Washington.

“For thirty hours, Wang met with U.S. officials and offered to share everything that he knew — a clear intelligence boon,” Schweizer wrote. “But Blinken reportedly halted the defection on fears that it would embarrass China on the eve of meetings with the Obama administration.”

Thanks to Blinken, Wang is now serving a 15-year prison sentence for his attempt to escape.

“Blinken has claimed that he had no involvement in the Wang case,” according to Schweizer. 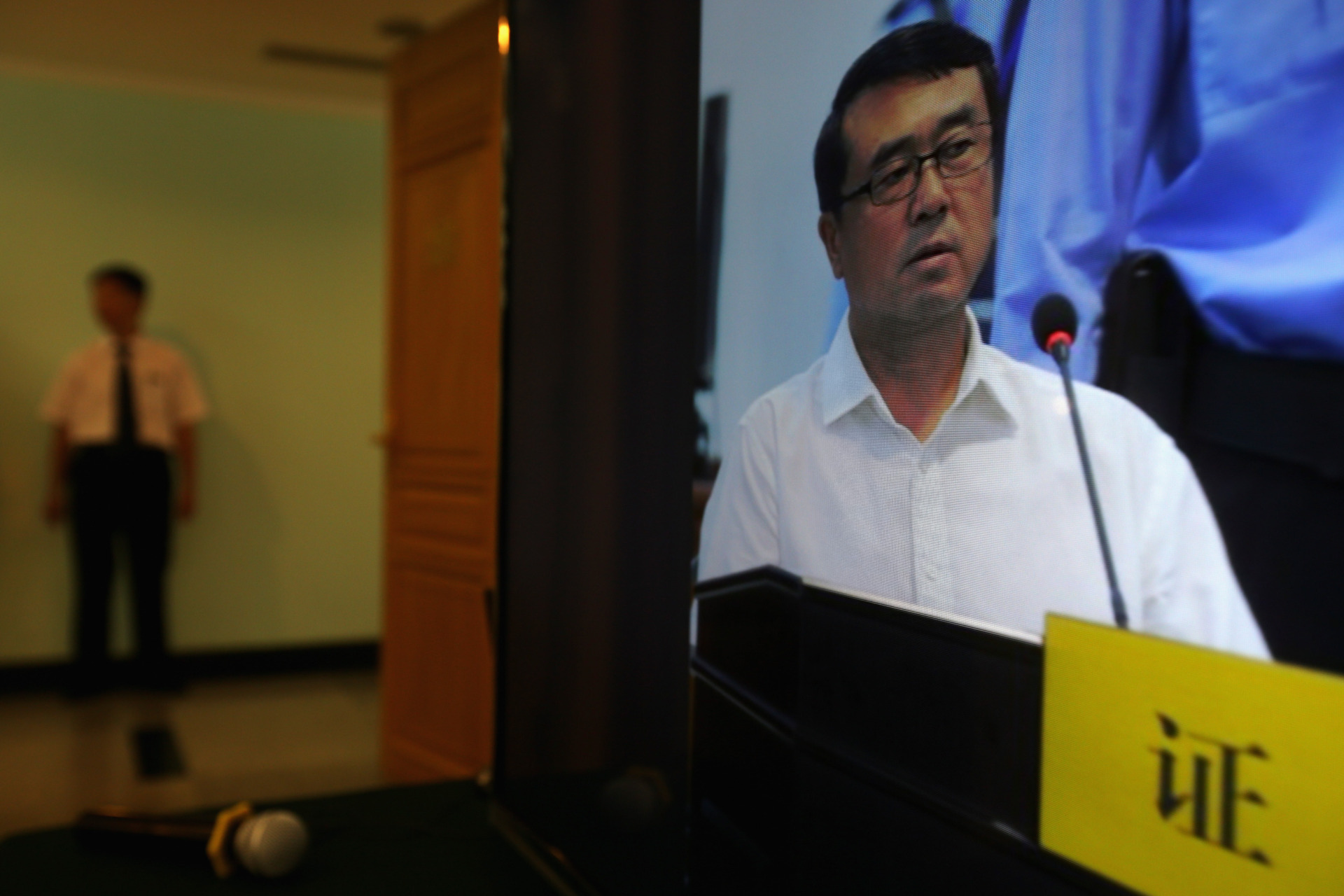 A Chinese attendant stands near a screen showing a picture of former police chief Wang Lijun as he gives evidence on the third day of the trial of disgraced politician Bo Xilai at the Jinan Intermediate People’s Court on August 24, 2013, in Jinan, China. (Feng Li/Getty Images)

Fear of embarrassing China has been the hallmark of the State Department under Blinken. Nowhere was this more on display than during a disastrous summit in March 2021 in Anchorage, Alaska, where Blinken allowed senior Politburo member Yang Jiechi – a longtime Bush family friend, Schweizer reveals in Red-Handed – to ramble on for 16 minutes about “Black Lives Matter” and “many problems within the United States regarding human rights.”

Blinken – and his partner at the summit, National Security Advisor Jake Sullivan, a former paid fellow at a Yale Law School center founded by pro-communist Alibaba magnate Joseph Tsai – did little to refute the litany of slanderous comments deflecting from China’s human rights atrocities and criminal behavior on the world stage. 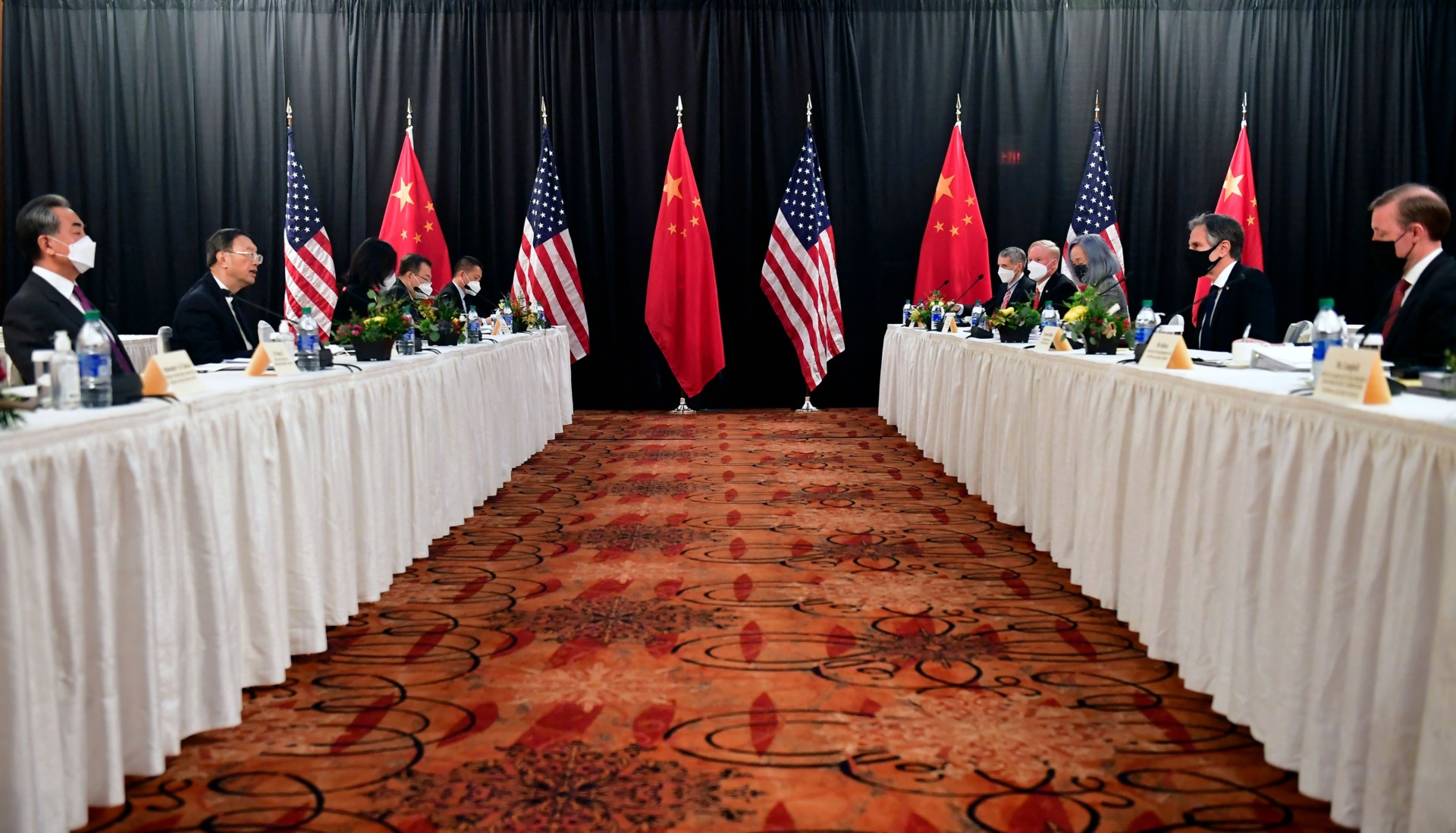 The incident was so embarrassing to the United States that Chinese companies began selling commemorative tote bags and cell phone cases with Yang Jiechi quotes from the summit on them.

Red-Handed was released by HarperCollins. Schweizer is the president of the nonpartisan Government Accountability Institute (GAI) and a senior contributor to Breitbart News.