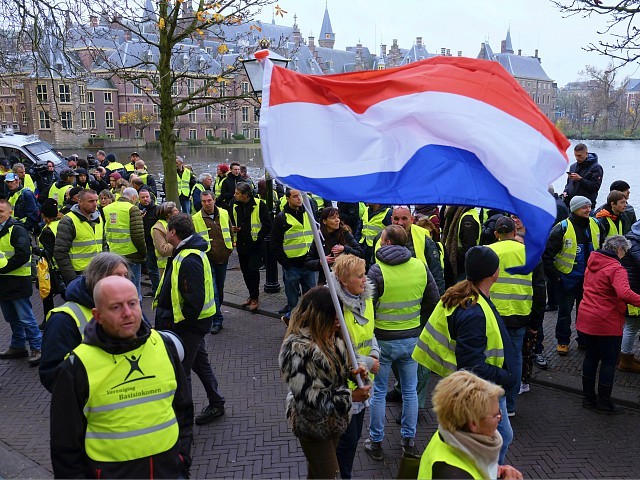 “Yellow Vests” have planned action across The Netherlands to protest against “political correctness” and immigration policies, and to call for the resignation of left-liberal Prime Minister Mark Rutte.

Unlike the French Yellow Vests, or Yellow Jackets, whose protest originated in reaction to Paris Climate Accord-inspired green tax hikes on fuel, their Dutch counterparts began their movement over government policies including immigration and healthcare.

They are also calling for a reduction in excise duties, the lowering of the age at which pensions can be received, and for the Dutch prime minister to step down, Algemeen Dagblad reports.

While last weekend’s protest in Paris was marked by its violence, the ones in Maastricht, Groningen, and The Hague were said to have come off relatively peacefully, with only a few arrests.

Announcing an expansion of protest action to include Rotterdam and Amsterdam this coming Saturday, movement organiser Jikkenien Deerenberg, 55, said that “everyone is welcome, but no banners, flags, or face coverings/balaclavas.”

Describing herself as a concerned citizen, Ms Deerenberg told Het Parool she is protesting “against the hardening of society.”

“Freedom of expression is under pressure, we have to be politically correct. It is a struggle,” he said.

“With the demonstration, I want to show that we want a voice. It is not a demonstration derived from anger over petrol prices like in France. We are doing well in the Netherlands.

“The problem is that we are no longer being heard. A lot is being decided over our heads,” the Dutch Yellow Vest added.

However, Paris is bracing for further action slated for Saturday, with the Gilets Jaunes’ demands having expanded to other issues including education reform, social security reforms, the cost of living, and most recently the UN Migration Compact which Macron has pledged to sign in Marrakesh, Morocco, next week.