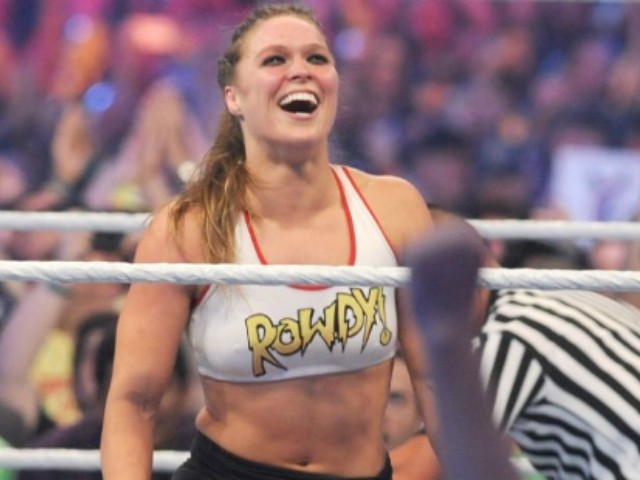 They call her the Baddest Woman On The Planet. Former UFC champion Ronda Rousey has taken the WWE by storm since making her professional wrestling debut earlier this year.

Rousey has taken on and taken out the likes of Stephanie McMahon, Nia Jax, Alexa Bliss, and the Bella Twins, all while paying homage to the late great Roddy Piper. Rousey not only dresses like the Hall Of Famer on her way into the ring, she’s even inherited Piper’s “Rowdy” moniker. She has lived up to it all. Piper would be proud.

Rousey fights with the spirit of Piper. She likes to get rough. She likes to throw a flurry of blows at her opponents from all angles. But while Piper was more of a street fighter, Rousey is all that and a supreme technician at the same time. She’s masterfully adapted her skills from Judo, a sport in which she won an Olympic medal, and her MMA talents into a repertoire of pure devastation. Rousey has stood up to every woman and even some men (Triple H, Kurt Angle, Baron Corbin) that have stood in her way.

Rousey’s rise in wrestling has been rapid and exciting. She captured the RAW Women’s Championship in August and she has not looked back. Rousey remains undefeated and she’s seemingly up for any challenge. But while those in-ring challenges are getting more and more challenging (Rousey was set to face WWE SmackDown champion Becky Lynch at Survivor Series until Lynch was scratched after suffering a concussion and replaced by Charlotte Flair), Rousey also has no problem taking on a whole generation of snowflakes.

On the latest edition of RAW, Rousey cut a promo going after Lynch, her next scheduled opponent. Lynch recently adopted the nickname ‘The Man’ as in ‘UDA Man’, and Rousey went after that as well. In the process, Rousey also took down the latte loving lads among us.

“Becky, you are so hypersensitive,” said Rousey. “You’re not just ‘The Man’, you are the Millennial man. You are the skinny jeans wearing, V-neck sporting, avocado toast munching, winged shoe wearing Millennial man with a bubble wrapped ego and a porcelain self-perception. Someone needs to tell ‘The Man’ that I am not Charlotte Flair, RAW is not SmackDown, and being offended doesn’t make you right. So you can put the violins away, champ. You are not Oliver Twist and I am not some trust fund baby golden child.”

The shots are directed at Lynch but the sentiment toward today’s wimpy males is just as piercing. While Rousey was trying to get Lynch’s goat, she also painted a word picture of today’s typical Bernie Sanders rally attendees.

The message transcends wrestling. We are living in a society in which many men act in a way that is anything but manly. Liberals embrace this sissification of America. Thankfully, there are huge purse winners like Rousey who still recognize the difference between real men and those who carry a man purse.

Whether you’re on Team Ronda or Team Becky, you have to love the rowdy one’s smack down of soy boys worldwide. One of the toughest women around exposed the safe space seekers in one brilliant rant.

Rousey’s wrestling hero Roddy Piper donned his trademark kilt. Now, the woman who emulates Hot Rod, has called out a bunch of skirt wearing Millennials. Now if only they would tap out and get out of everyone’s way.