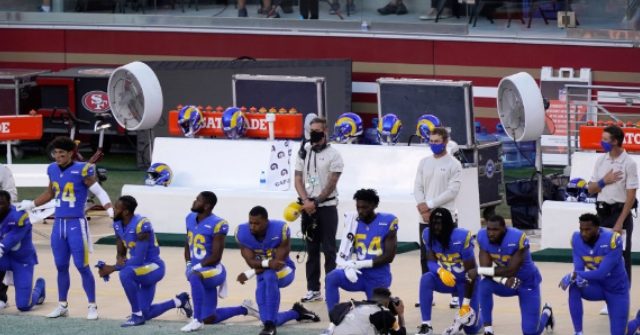 The NFL has suffered another ratings disaster, this time a 17 percent nosedive for Week 6 of Sunday Night Football.

According to Sportsnaut.com, NBC earned 9.43 million viewers for its game between the 49ers and the Rams and picked up a 2.8 rating in the 18-49 demographic. But that is a hefty loss from Week 5 when 11.4 million people turned in to see the Seattle Seahawks and the Minnesota Vikings.

Indeed, Sunday Night Football has slipped further behind for each of its now six broadcasts this year. Sportsnaut noted that Week 1 earned 18.94 million viewers, but it steadily eroded from there. Week 2 fell to 17.69 viewers, Week 3 only reached 16.57 sets of eyeballs, Week 4’s numbers fell to 15.08, Week 5 captured 11.4, and, finally, Week 6 bottomed out to 9.43 million viewers.

This year is also a deficit compared to the 2019 season. According to Sports Media Watch, the eight Sunday Night Football games for 2019 earned an average of 20 million viewers. And in specific numbers, only two of those eight finished with less than 17 million viewers.

Some analysts maintain that the NFL’s numbers will increase once its Major League Baseball competitor finally wraps up its coronavirus-delayed 2020 season. Further, pro sports broadcasts are still earning much higher ratings than the rest of TV.

The numbers do show some bright spots for the NFL, though. ESPN’s Monday Night Football broadcast for Week 3, for instance, gained 32 percent over its 2019 broadcast. And a few games have earned more than 20 million viewers.