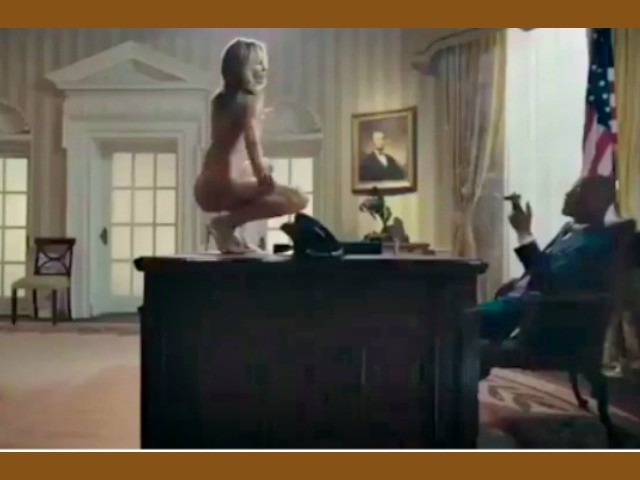 The actor and rapper dropped the video on October 12 after fellow rapper and one-time collaborator Kanye West met with President Donald Trump in the oval office. The not safe for work clip features T.I. hanging around in the Oval Office after the president is seen flying off on Marine One. The rapper then sits behind the Resolute Desk smoking a cigar as a woman who looks like Melania Trump comes in wearing that famous “I Really Don’t Care, Do U?” coat.

But then the woman casts off the coat to reveal she is naked underneath. She then begins cavorting with T.I. as the pair deface the Oval Office with spray paint.

The tweet was meant to promote his new album, Dime Trap.

The rapper also posted a separate post to social media slamming Kanye for meeting with the president. “All I can say is… I’ve reached my limits,” T.I. wrote on Instagram. “This is my stop, I’m officially DONE!!!! [F—] Trump & his Lil Cookie Boy.”

“At one time it was a pleasure to work alongside you…” T.I. exploded. “Now, I’m ashamed to have ever been associated with you.”

“This is the most repulsive, disgraceful, embarrassing act of desperation & auctioning off of one’s soul to gain power I’ve ever seen,” T.I. added. “You ass kissing and boot licking on a whole new level & I refuse to associate myself with something so vile, weak, & inconsiderate to the effect this has on the greater good of ALL OUR PEOPLE!!!!”

The rapper’s ire was raised by West’s Thursday visit to the White House where the Yeezus singer went on an extended monologue during which he accused the left of trying to control black people with constant cries of “racism.”

“A liberal will try to control a black person through the concept of racism because they know that we are very proud emotional people,” West said. “You think racism can control me? That don’t stop me, that’s an invisible wall.”