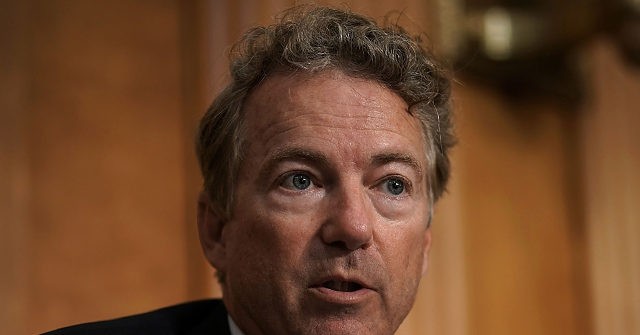 Sen. Rand Paul (R-KY) slammed YouTube for removing a video where he mentions “Eric Ciaramella,” the CIA analyst and former National Security Council staffer named by some media outlets as the likely whistleblower whose complaint sparked the impeachment inquiry.

“I’m not for censoring YouTube, they’re a private company, they can do what they want, but they should not be above criticism and they should not pretend to actually be for expansive speech,” Paul said on a conference call with reporters on Thursday.

A YouTube spokesperson said in a statement that naming Ciaramella violated their guidelines and that they had removed hundreds of videos and over ten thousand comments that contained his name.

RealClearInvestigations first named Ciaramella as the likely whistleblower whose complaint to the intelligence community inspector general was used by House Democrats to kickstart the impeachment process.

Despite House Intelligence Committee Chairman Adam Schiff (D-CA) being the only member of Congress whose staff interacted with the “whistleblower” and know who the whistleblower is, Democrats have accused Republican members of Congress of trying to “out” him by saying Ciaramella’s name.

Paul said during a conference call with reporters he was not outing any whistleblower. He said he was referencing another RealClearInvestigations report that said Ciaramella and Sean Misko, a Schiff aide and former NSC staffer, were overheard discussing taking the president down:

My question made no reference to the whistleblower, doesn’t allege that anybody is the whistleblower. My question during the trial simply asked whether or not Sean Misko and several of the attorneys who worked for Adam Schiff, whether they knew a fellow by the name of Eric Ciaramella at the National Security Council, and whether or not if several years in advance of the impeachment they were overheard plotting to bring the president down. My question is whether or not this should be discussed – whether this was a long-term process and a cabal or a conspiracy to find a means to bring down the president through the official process, and I think that should be open in a free society for debate.

He said YouTube has tried to reassure him in the past that the company is screening conservative or libertarian thought.

They’re making a big mistake here and I will use my public platform to blast them if this is the way they’re going to behave. I will use every opportunity to let people know that they are biased, bigoted, and towards the left, and we’re going to be very vocal about that.

He said it is somewhat ironic that while accusing him of outing the “whistleblower,” Roberts and others are inadvertently confirming it is Ciaramella.

“That’s the irony — that the chief justice actually appears to be confirming who the whistleblower is,” he said.

He said the other irony is the selective outrage over protecting the “whistleblower’s” identity, while he is receiving death threats over saying Ciaramella’s name.

“I’ve gotten over 200 death threats in the last week, and they’re putting my address on the internet,” he said. He added:

I’ve been at the ball field when Steve Scalise was almost killed, I’ve had shots fired at me, I’ve had six ribs broken and all the things people seem to be concerned with are these leftwing people who are instigating the violence, you know, protecting them somehow, but I haven’t seen any concern from these leftwing outlets for my safety.

How many YouTube videos and tweets have there been advocating that the person who committed a violent attack, who stuck up from behind me broke six of my ribs and was a hater of both my politics and the president’s, how many times has it been reposted that they wish that he would come back and commit more violence? Twitter doesn’t take one of those down and I haven’t looked at YouTube videos, but I’m sure people are doing it on YouTube as well.

Paul also noted that the same people wanting to protect Ciaramella have also called for whistleblower Edward Snowden be in jail or killed, despite his whistleblowing leading to more protections for Americans. Paul said:

So it’s selective outrage, and they like this whistleblower because they hate Trump. It’s Trump Derangement Syndrome and they’re not at all objective when it comes to whistleblowers, but they’ve wrapped themselves in the cloak of this and think that they’re doing some sort of religious duty by protecting him.

“I consider the beginning of this impeachment process to be corrupt,” he said. “And I see talking about this to be an important duty so it doesn’t happen again.”