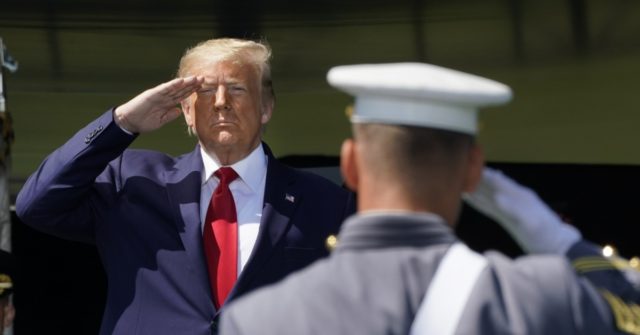 Leftists on social media speculated about the health of President Donald Trump on Saturday after video showed him carefully descending a stage ramp at the West Point graduation ceremony.

President Trump cautiously descended the ramp but sped up at the end. The video spread quickly on social media as leftist critics speculated the president’s health was in decline.

Why is Trump having trouble walking down a ramp and drinking a glass of water with one hand?

Does he have Parkinson’s?

What was the reason for the mysterious Walter Reed trip last year?

then, there’s the stairs. pic.twitter.com/ngwru8TTNy

Trump defended his cautious walk down the ramp noting it was long, steep, slippery, and had no handrail.

“The last thing I was going to do is ‘fall’ for the Fake News to have fun with,” he wrote. “Final ten feet I ran down to level ground. Momentum!”

The ramp that I descended after my West Point Commencement speech was very long & steep, had no handrail and, most importantly, was very slippery. The last thing I was going to do is “fall” for the Fake News to have fun with. Final ten feet I ran down to level ground. Momentum!