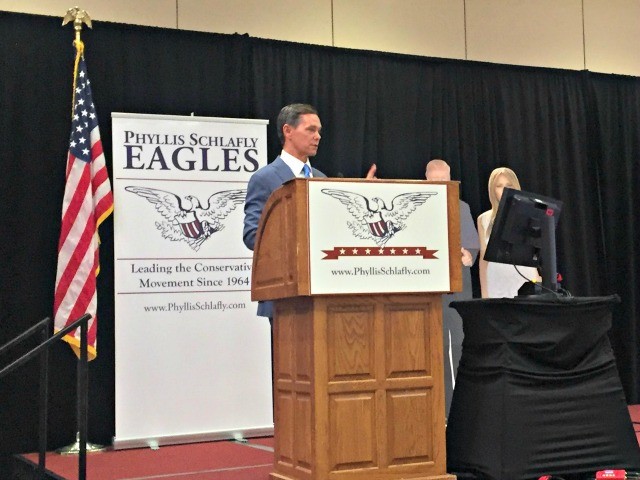 Reed, who also helped found and lead the Christian Coalition — critical to the Christian voter turnout of the 1990s and George W. Bush era — tried to impress upon the Eagle Council audience the importance of “having the votes.” To illustrate, he used the example of the Coalition’s victory at the 1996 Republican National Convention, where, by controlling the loyalty of “more than 40 percent” of the convention delegates, they were able to prevent the softening of the Republican Party platform’s pro-life plank.

Reed warned against complicity and passively watching the news, preparing to be a “victim” of a Democratic vicotry in the fast approaching 2018 midterms. Instead, Reed urged, “we can spend the next 55 days touching every conservative voter, every voter of faith, and every pro-Constitution and Bill of Rights voter in this country, and getting them to the polls, and let them witness what we’re getting ready to do when we get our vote out. There is nothing else that matters in a free society other than having the votes.”

Reed did not endorse Donald Trump for president until after he had won the Republican Party’s nomination. But he made no apologies for heis and many other Christian political leaders’ decision to do so. “I had no reservations at all. But some of you may have had friends who did, maybe some of you did. We had a decision to make,” he said. “And we decided, with very few exceptions, as a pro-life and pro-family movement, to back this man and to back him with everything that we could.”

Donald Trump, as Reed put it, was not the “lesser of two evils,” but the “greater good.”

Reed pointed to three “inflection points,” in the 2016 campaign that brought the Christian Right unapologetically into the Make America Great Again camp. The first was Trump’s May 2016 commitment to pick the late Justice Antonin Scalia’s replacement from a list of 21 well-known conservative judges. Reed called the announcement “one of the most significant and brilliant political moves in a presidential campaign in the post-World War II era.”

Reed’s wife Joanne, as Ralph related, had particularly good luck in converting conservatives releuctant to support Trump with a simple recitation of the ages of the six oldest sitting Supreme Court justices. “Not once did she not flip their votes” with the prospect of Hillary Clinton being able to pick their replacements.

The second inflection point was the third presidential debate, on October 10, 2016, two days after the infamous Access Hollywood tape’s release. When Clinton was asked about late-term abortions right up until birth, as Reed saw it, she “showed no compassion” and “just gave the usual Planned Parenthood, left-wing talking points.” Trump replied that “She may be OK with with that, but I am not OK with that and I don’t think the American people are OK with that.”

“When those words left his mouth, my wife Joanne turned to me and said, ‘I think he just won the election.’ And you know what? I think he did,” Reed said of this moment.

The third point was the selection of pro-life stalwart and arch-conservative Christian Mike Pence as Trump’s running-mate.

Turning to 2018, Reed emphasized that everything that has been accomplished in the last 19 months is at stake if the Trump presidency is “cut-short” by a Democratic victory.

“That’s why we’ve got to work harder than we have ever worked before. And we’ve got 55 days to do it,” Reed exhorted the audience.

The Faith and Freedom Coalition, according to Reed, has an aggressive get out-the-vote plan in place to corral “26,562,539 Evangelical and pro-life Catholic voters” to the polls in “19 states that are gonna decide the outcome of this election.” The plan will involve “19 million pieces of voter education mail,” “30 million voter guides” to be distributed in “137,000 churches,” “32 million videos” on social media, text messages, and targeted phone calls in the final six hours polls are open.

“Let me tell you what’s gonna happen. In North Dakota, in Missouri, in Montana, Indiana, Florida, Nevada, Arizona, Tennessee, now Texas where they’re trying to take out Ted Cruz — and by the way they can forget it,” Reed said, “in all those key Senate races and about 40 House races, we’re gonna turn out the biggest Christian vote that has been seen in a midterm election modern political history.”

In closing, Reed made a direct comparison between two years ago and today. “Let’s make sure the media is shocked again on election night one more time,” he told the audience.