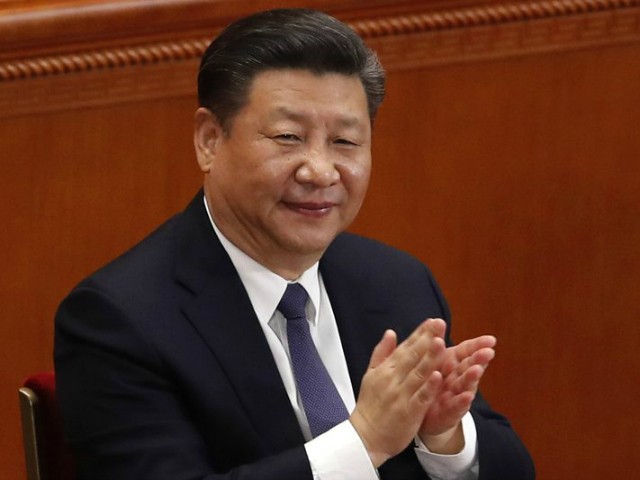 Chinese Communist Party chief Xi Jinping declared in an opinion piece published Monday in Philippine media that the dispute about China’s colonization of the South China Sea is officially over. Xi is scheduled to arrive in Manila on Tuesday.

China claims most of the South China Sea and has illegally constructed military and surveillance facilities in the Spratly Island chain, shared between Vietnam and the Philippines. The Permanent Court of Arbitration at The Hague ruled for the Philippines and declared China’s invasion of the territory illegal in 2016. China responded by vowing to ignore the ruling and continuing to expand its reach in the region.

In his piece, published in several Philippine newspapers Monday, Xi declares that, thanks to President Rodrigo Duterte’s refusal to confront China on its illegal development, their “relations have now seen a rainbow after the rain.”

“We need to properly handle differences through friendly consultations, enhance dialogue and cooperation on maritime issues, and make the South China Sea a sea of peace, friendship, and cooperation that truly benefits our two peoples,” Xi writes, announcing that China has become Manila’s largest trading partner and expects the Philippines to participate actively in One Belt, One Road (OBOR), or the Belt and Road Initiative, the Communist Party’s plan to control all major global infrastructure.

“The Philippines, with its unique geographical advantage, is a natural partner in the Belt and Road Initiative. China wishes to work with the Philippines to renew the legacy of the ancient maritime Silk Road,” Xi writes. “Trade liberalization and economic globalization is an unstoppable trend of our times. As a major responsible country committed to win-win cooperation and greater openness, China stands ready to share with all countries the opportunities and potential of its market.”

Xi also takes the time to argue that China is not a belligerent entity in the region despite its consistent attempts to block Philippines vessels from their sovereign territory. Instead, Xi argues that China has long fallen victim to Western hostility.

“Several centuries ago, China’s GDP already accounted for 30 percent of the global total, yet it never engaged in aggression or expansion,” Xi claims, adding:

In the over 100 years after the Opium War in 1840, China suffered immensely from repeated aggression, wars and turmoil. … China will remain committed to the path of peaceful development and will always stay as an anchor of peace and stability for the Asia-Pacific and the wider world.

Xi is expected in the Philippines on Tuesday after visits to Papua New Guinea and Brunei.

The 2016 ruling that legally banned China from colonizing the Spratly Islands occurred during the administration of the more U.S.-friendly former President Benigno Aquino. Following Duterte’s victory, however, the Philippines have done nothing to enforce the decree. On the contrary, Duterte has repeatedly argued that the Philippine military is too weak to go to war with China, and he has no interest in challenging Beijing.

During this weekend’s Asia-Pacific Economic Cooperation (APEC) conference in Papua New Guinea, Duterte discouraged Washington’s policy of standing up for Philippine sovereignty in the region.

“And in all of these things, China is there. That’s a reality and America and everybody should realize that they are there,” Duterte said. “So if you just keep on creating friction, little friction, one day a bad miscalculation could turn things… Murphy’s Law – if anything can go wrong, it will go wrong.”

Duterte added that he did “not mind everybody going to war, except that the Philippines is just beside those islands. And if there’s a shooting there, [his] country will be the first to suffer.”

Duterte has been otherwise largely absent in both the APEC summit and other international events in the region this week, scheduled in a cluster to take advantage of having a large number of world leaders in one place. Duterte skipped several events at last week’s Association of South East Asian Nations (ASEAN) summit to take “power naps,” according to a presidential spokesman.

Duterte’s friendly behavior towards China has netted him significant criticism within his country. A national poll published in July found that as much as 70 percent of the country wanted Duterte to challenge China directly on South China Sea claims. Articulating their concerns in a piece on Sunday, Philippine Star columnist Federico D. Pascual Jr. wrote:

President Duterte could have served national interest just by staying in bed – for “power naps” or whatever – and not saying a word about Chinese expansionism while he was in Singapore last week for the 33rd summit meetings of the Association of Southeast Asian Nations.

As China continued to occupy and militarize these artificial islets in the Philippine EEZ [exclusive economic zone], not a whimper of protest was heard from Duterte. He had just pivoted to the left toward Beijing apparently hoping to secure the massive investments, loans and aid dangled before him.

While Duterte refused to challenge Xi, representatives of the U.S. government, including National Security Adviser John Bolton and Vice President Mike Pence, vocally opposed giving China the power to impose a code of conduct on other nations in the international waters of the South China Sea.