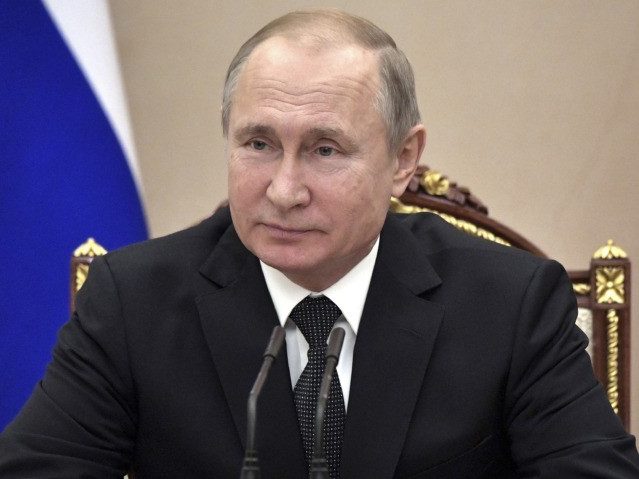 Russian President Vladimir Putin will meet with Bolivian President Evo Morales to strengthen strategic ties and discuss the humanitarian crisis in Venezuela, Russia’s ambassador to the country said on Thursday

According to Cuban government propaganda arm Prensa Latina, the Russian Ambassador to Bolivia Vladimir Sprinchan told a local news station that Putin plans to visit the capital of La Paz “to strengthen bilateral relations as strategic allies,” particularly with regard to matters of health, energy, and security.

“He highlighted the construction of the Center for Research and Development in Nuclear Technology in El Alto for peaceful means, which will have a multipurpose irradiation plant, a complex cyclotron-radiopharmacy-preclinical and a nuclear research reactor,” the agency reported.

Both countries remain steadfast backers of Maduro’s leadership. Bolivian leader Evo Morales considers him one of his few remaining socialist allies following a rightward shift in the leadership of much of Latin America. Last month, Morales visited Maduro in Venezuela, where he declared his continued support against attempts by the “empire” to remove him from power and replace him with a democratic alternative.

“We are meeting with my fellow President of Venezuela Nicolás Maduro and expressing all our support to him in the face of the overthrow and intervention by the empire that wants to appropriate Venezuela’s national wealth in violation of international law. Bolivia supports dialogue aimed at avoiding conflicts,” Morales wrote on Twitter.

Moscow continues to provide the socialist regime with crucial financial and military support. However, reports suggest there is increasing concern among Kremlin officials about how much longer Maduro can last, as the majority of Venezuelans rally round interim President Juan Guaidó, the country’s legitimate head of state. In addition to Venezuelans, dozens of nations – most in Latin America – have refused to do business with Maduro and instead accept Guaidó as the nation’s president.

In addition to Bolivia and Venezuela, Putin has also maintained close ties to the communist dictatorships in Cuba and Nicaragua, providing them with vital political and military support in a bid to expand Moscow’s influence over Latin America and the world as a whole.