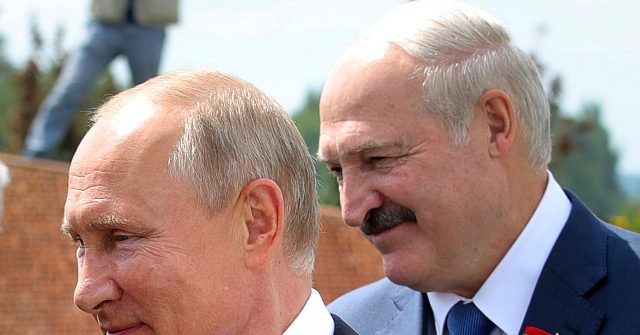 Russian President Vladimir Putin offered Belarus a billion-dollar loan on Monday while hosting the country’s embattled leader at his residence in Sochi, Russia.

The visit marked Belarus President Alexander Lukashenko’s first foreign trip since protests erupted in his country over a month ago demanding that he resign.

“Russia will issue a loan of $1.5 billion dollars [to Belarus] … Now, our finance ministers are … working on that,” Putin told Lukashenko, according to video footage of the meeting published by RT, Russia’s state-run news agency.

“[W]e will also need to continue our collaboration in the military area,” Putin continued. “Today we are starting exercises that we have planned last year that will take a couple of days. And, once again, I would like to say to avoid any kind of speculations, these exercises were planned and even announced last year.”

Putin was careful not to frame his offers of financial and military aid to Belarus as support for Lukashenko to maintain power in the face of mounting opposition to his rule. Rather, he argued that Russia pledged the aid to fulfill “obligations” the nation has previously made toward Belarus, which he described as Russia’s “closest ally.”

Putin referred to the close relationship the two countries maintain under the terms of a 1999 Treaty on the Creation of a Union State between Russia and Belarus, which “calls for cooperation on foreign policy, defense, [and] social and economic policies” between the two states to create “a unified parliament and a single currency in the future,” according to the Observer Research Foundation.

The Russian president specifically mentioned the “Union State treaty” on Monday, referencing the “integration” between the two states that the agreement calls for. According to some observers, Putin pushes to fulfill the pact’s obligations in the hopes of reunifying Belarus with Russia to form a supra-state. The two leaders previously met in Sochi in early February for similar talks in which Putin pressed Lukashenko to further integrate with Russia according to the pact’s requisites. However, over two decades since the treaty’s signing, it continues to exist largely “on paper, partly because in the past Lukashenko has been reluctant to cede power,” the Guardian claimed.

Putin also addressed the ongoing protests in Belarus calling for Lukashenko, who has ruled the country for 26 years as president, to step down. The unrest started after an August 9 presidential election saw Lukashenko elected to a sixth consecutive term in office. Dissidents took to the streets that same day, accusing the state election committee of falsifying the vote, launching a protest movement that has continued unabated since then.

“You know our position very well. We stand for … Belarussians by themselves, without any interference, engaging in a dialogue [to] calmly find a solution, find a common ground on how to build or work in the future. We know about your suggestion to start work on the constitution, we think it makes sense,” Putin said, referring to Lukashenko’s offer to reform the constitution in response to the anti-government protests.

Lukashenko is the only president in Belarus’s history.