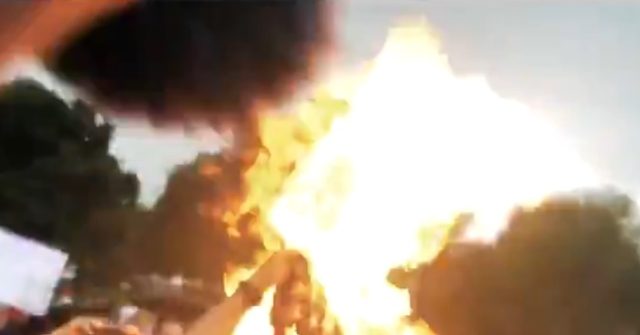 Multiple protesters were detained in the nation’s capital Thursday after a protest got out of hand, with communists burning the American flag outside of the White House prior to the “Salute to America” event.

The Revolution Club’s Gregory “Joey” Johnson – who won the landmark 1989 Supreme Court case Texas v. Johnson on flag burning – announced his plans to burn the American flag in protest of the “Salute to America” event earlier this week.

“Tomorrow on the Fourth of July, I am going to be [burning the American flag] right here … in front of the White House,” he said.

It is not clear if it is Johnson burning the flag in the video, but at least three people were arrested, Fox News reports.

Additionally, a far-left activist headbutted a man in an “America” shirt, adding to the chaotic scene. Authorities quickly intervened.

According to additional reports, many counterprotesters thanked police for intervening and chanted “Trump 2020” as the Revolution Club protesters saw themselves out of the area.