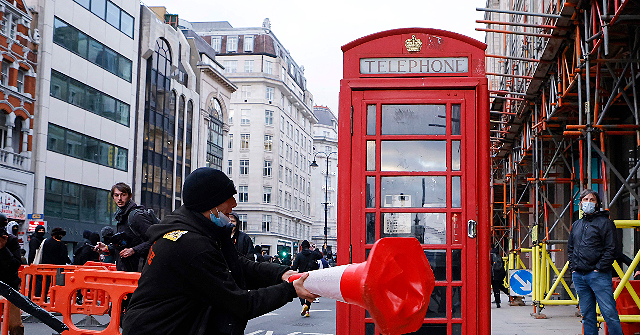 LONDON (AP) – Hundreds of people marched Saturday through central London and other cities across England and Wales to protest the British government’s plan to hand the police new powers to tackle demonstrations.

Protesters walked past Buckingham Palace towards Parliament Square, just outside the Houses of Parliament. A ring of officers positioned themselves around the statue of wartime prime minister Winston Churchill in Parliament Square. The statue had been defaced during Black Lives Matter protests last year.

Protesters, including many who carried anti-sexism placards and chanted “Women scared everywhere, police and government do not care!” passed by Prime Minister Boris Johnson’s office at 10 Downing Street.

London’s Metropolitan Police said the majority of people “have tried to adhere to social distancing” but that a “small minority” had blocked the road at Parliament Square.

“Officers are on scene engaging and encouraging them to move so we can reopen the roads,” it said.

The protests were taking place over the long Easter holiday weekend, including in the Welsh capital of Cardiff and in the northern England cities of Liverpool, Manchester and Newcastle.

The demonstrators were upset at the Conservative government’s Police, Crime, Sentencing and Courts Bill, which is currently going through parliament. Under the terms of the bill, which covers England and Wales, police will be able to ban or shut down protests.

Separately, 27 police officers were injured during riots in Northern Ireland on Friday evening and eight people were arrested. The reasons behind the unrest were unclear.

The Police Service of Northern Ireland said 15 officers were injured in Belfast after being targeted by a crowd of mainly young people, throwing stones, fireworks, flares, manhole covers and petrol bombs. It said 12 more police were injured in Londonderry after young adults threw stones, bottles, petrol bombs and fireworks.