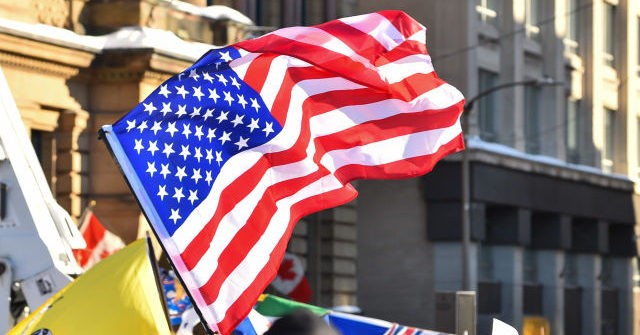 A large crowd chanting “We Won’t Comply” gathered outside of the Canadian Embassy in New York City on Tuesday. The protest, made up of Americans according to social media posts, was in support of the “Freedom Convoy” of truckers north of the border who have been protesting government vaccine mandates.

happening now in front of the Canadian embassy in NYC. Activist against mandates show their support for the people of Canada and chant ” we will not comply”#CanadaHasFallen #nyc pic.twitter.com/bQma0WAAZe

Despite the new force being used against their protest, the truckers on Monday said in a press conference that they would “hold the line.” Footage by Leeroy Press shows protesters outside the Canadian Embassy on Manhattan’s Park Avenue waving American and Canadian flags and showing their support for the protesters against the Trudeau government, which yesterday enacted the Emergencies Act. This was opposed by premiers of Alberta, Saskatchewan, Manitoba and Quebec.

The Prime Minister said that under the Act his government would move to freeze the funds of those who are protesting, as well as revoke their licenses and insurance.

Truckers have been staging a protest in Ottawa near Parliament Hill for three weeks, and have stated their intention to stay there until vaccine mandates put in place by Trudeau are lifted. What began as a protest that was opposing mandates specific to their industry has become a global cry for an end to restrictions inspired by the Covid pandemic.

“I asked an American activist about how he felt about Justin Trudeau invoking the emergency act law he started ‘You can shove it up your ass Justin,’ Viral News NY tweeted. #JustinTrudeau #CanadaHasFallen #nyc pic.twitter.com/lfITIkvkRf

Coutts police honors, greets and hugs truckers who have blocked the US – Canada border for 18 consecutive days. pic.twitter.com/RL4F7l0JBh

#CanadaHasFallen
Thank you @JustinTrudeau for showing your true colors. Glad you envy President Xi so much you are following in his footsteps pic.twitter.com/bvAgwRRlAm