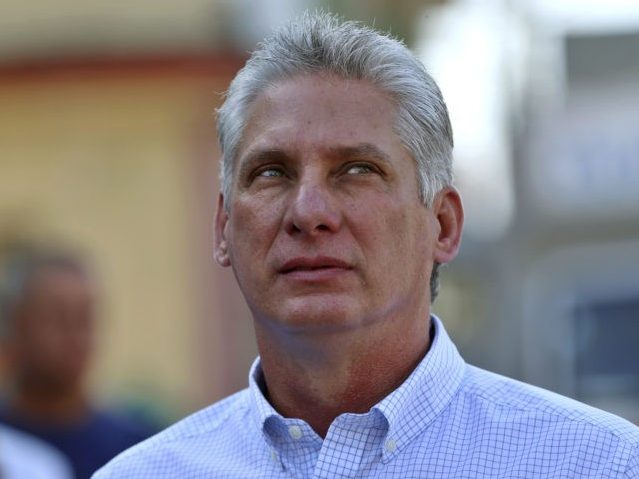 A video circulating among Cuban dissident outlets this weekend shows a convoy carrying Cuban second-in-command, President Miguel Díaz-Canel, and several high-ranking communist officials forced out of the Regla neighborhood of Havana by an angry crowd of tornado victims shouting “shameless!” and “liars!”

Díaz-Canel, as president, has the responsibility of making public appearances on behalf of the regime, though he still answered to Communist Party leader and national dictator Raúl Castro, as per the Cuban constitution. He and his assistants can be seen driving a modern Mercedes-Benz through Regla, now reduced almost exclusively to rubble.

The first tornado to hit Cuba since 1940 made landfall last week in Regla and destroyed homes in several other neighborhoods. The storm is believed to have killed at least six people and injured over 100 others.

Rather than offer free humanitarian aid, particularly given the lack of electricity in the most devastated areas, the Cuban regime has been selling the victims food like eggs and rice.

After days of being forced to pay for food necessary to survive, Regla residents unloaded on Díaz-Canel when he attempted to make a public appearance there. While the video began circulating on Saturday, the U.S.-based Martí Noticias reports that the incident occurred on January 27.

The video depicts crowds approaching the convoy to shout insults at Díaz-Canel, including “liar!” and “shameless!” One woman can be heard yelling “get out of here … we are not showing up on television!”

Another accuses the government of “pure propaganda,” while most appear to simply boo.

The communist regime has responded by claiming that the video is “doctored” and “fake news.” The newspaper Diario de Cuba, based in Spain, collected articles on Monday from Cuban government-funded sources that described the video as “manipulated”

“You don’t have to be an audio-visual expert to see that this video against Díaz-Canel is manipulated,” an article in the state-run CubaDebate website read. “What we have seen for months is that, wherever Díaz-Canel goes, enthusiasm, affection, recognition, hands reaching out, and mutual identification is what we have seen.”

On Cuban television, the video was simply referred to as part of a series of “lies” against the regime.

Yet Díaz-Canel himself appeared to recognize that the incident did happen in remarks this weekend after the release of the video.

“We must be sensitive with the people because they are very hurt over what happened. We must understand that all who are in this complicated situation may react with irritation, with a lack of understanding,” Díaz-Canel said. “But we must also explain to people that this cannot be solved in a day or two, this is going to take weeks of work.”

Locals on the ground have also stated they not only witnessed but participated in the public shaming.

“The government won’t help us and they won’t let anyone else help, either,” a woman identified a Sonia told Diario de Cuba in a report published Monday. “These people, the victims, simply lost everything in a couple of hours. Those who want to help have taken from themselves to help someone more fucked than them, that’s why we booed Díaz-Canel.”

On Sunday, Granma, the official newspaper of the Cuban Communist Party, published a story claiming that thousands of emergency housing units for hurricane victims had already been built in parts of Havana.

Reports began surfacing last week that much of the aid offered to victims is sold to them, despite living in a communist ration system. The outlet Cubanet, citing sources on the ground, reported that the government opened up kiosks last week serving helpings of chicken and rice at 1.65 Cuban pesos (about $0.06) an ounce. Others reported the sale of eggs and crackers by local officials on the side.

Many of those with no access to food also have no access to money, as all their belongings were destroyed in the tornado.

The Cuban Observatory for Human Rights, an NGO operating on the island, published a video Sunday showing the quality of eggs being sold, many of them cracked and old.

Those on the ground attempting to distribute free, private aid continued their complaints on Monday.

“It is shameful what the head of the CDR [Committee for the Defense of the Revolution, the neighborhood espionage system] here is doing, she always sends aid to the same houses every time donations arrive,” one aid worker told 14 y medio, a Cuban independent outlet.

Omara Ruiz Urquiola, an activist organizing aid packages for Regla, told Diario de Cuba that she experienced similar issues with the local Regla officials. “It is inhuman to prevent this aid to go through,” she said. “In Regla, you see massive lines to buy rations of chicken, of which there isn’t enough for everyone, so the government is not even guaranteeing the distribution of food.”

Anonymous witnesses told the newspaper that the government has also held back access to construction materials to be used for reconstructing homes and rehabilitating the few still standing in the neighborhood.