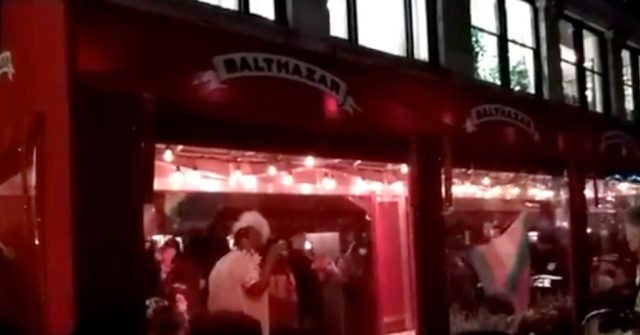 A crowd of protesters disrupted diners eating in the outdoor dining area of an upscale French restaurant called Balthazar in New York City on Thursday night.

Dozens of demonstrators flocked to the restaurant’s outdoor space, some repeatedly banging on the restaurant’s windows, while one of the protesters who called herself Qween Jean gave a speech.

After Qween Jean swiftly demands Spring Street diners’ attention for an important message about NYC’s Black and Brown communities, she concludes, “Have a good evening,” and the group sweeps onward.

“So many black and brown indigenous community members are often left out,” Qween Jean can be heard saying, according to a video of the encounter.

“They are often neglected, left out, unhoused, without food, without medication, without medical care, without mental health access. And we’re here with the message because we believe that black lives matter,” she added.

It is unclear what the extent of damage to the restaurant was, and police said Friday that they could not confirm if anyone from the restaurant filed any complaints.

But the NYPD News Twitter page tweeted a video of the protesters Thursday outside Balthazar in the SoHo neighborhood of New York City.

Tonight, in Lower Manhattan demonstrators purposely caused property damage to a local restaurant by breaking several windows while patrons were eating dinner. Small businesses need our support, vandalism is not the answer especially during these trying times. pic.twitter.com/5JdvEJoFqK

“Tonight, in Lower Manhattan, demonstrators purposely caused property damage to a local restaurant by breaking several windows while patrons were eating dinner,” the police department tweeted. “Small businesses need our support. Vandalism is not the answer, especially during these trying times.”

The NYPD also added that the protesters allegedly caused damage to a police cruiser.