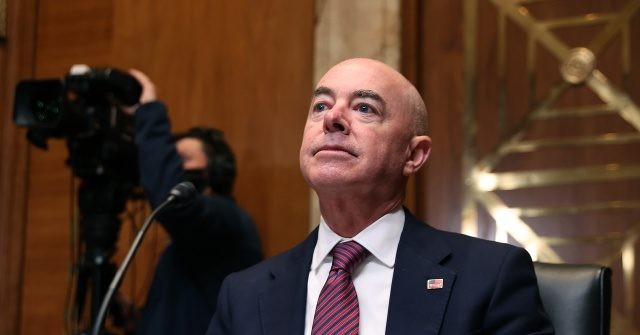 The protesters, who broke out a 30-foot emergency blanket reading, “Biden Presidency Trump Policy,” came together outside the DHS chief’s home, accusing the Biden administration of continuing what they describe as “Trump’s cruel immigration policies”:

Biden promised to dismantle Trump’s cruel immigration system, and replace it with one that’s “fair and humane.”

Instead, his admin is doubling down on Trump’s policies and tactics of fear. It’s exactly what we all voted against. pic.twitter.com/nTeqt2erYv

“Secretary Mayorkas, himself a refugee and the child of Holocaust survivors, has now joined the long list of U.S. officials enforcing racist policies that turn away desperate refugees and migrants, sending many of them back to their deaths,” Never Again Action campaigns director Alyssa Rubin said.

“We are here today in honor of our ancestors who died because they were turned away from the U.S. by policies just like these,” she added.

A press release detailing the protest said it was in direct response to the “horrifying scenes documented at the border” as activists call on Mayorkas “to end the Title 42 deportations of refugees at the border, denying them their right to apply for asylum.” Protesters also demanded Biden cancel all ICE contracts — a promise outlined by Biden. While the organization recognized Mayorkas canceled one, 115 still remain, “empowering local police to sweep up immigrants for deportation,” they said.

The demonstrators said they spoke to Mayorkas’ wife, who was said to be “very angry” and told them that “this was her family home.”

“And we really do understand that. But again, there are families being torn apart every day. There are people being deported from their home forever, every day,” demonstrators said, defending their actions.

“We know that doing an action at someone’s house can make things personal & bring families into the equation. But our first responsibility is to the personal trauma and the families torn apart by Trump’s policies, that the Biden administration continues to use against immigrants,” they said:

We know that doing an action at someone’s house can make things personal & bring families into the equation.

But our first responsibility is to the personal trauma and the families torn apart by Trump’s policies, that the Biden administration continues to use against immigrants. pic.twitter.com/yf9PxHgFyY

The protest coincides with the current border crisis, as thousands of primarily Haitian migrants walk across the border, pouring into Texas:

“Our country is being turned into a migrant camp,” former President Trump said in a statement on the crisis, noting that “tens of thousands of illegal immigrants have overrun our borders in recent days while laughing in the faces of our border patrol agents.” He continued:

Under my administration, we ended catch and release. We shut down asylum fraud. We struck historic agreements with Mexico and Central American nations to stop illegal immigration, and we deported dangerous criminal aliens by the tens of thousands. including MS-13 killers. We got them out by thousands. We built almost 500 miles of powerful border wall. … We created the most secure border in the history of the United States of America.

Meanwhile, the nation’s border security chief has essentially told migrants how to sidestep the Title 42 coronavirus emergency rules and dismissed the flood of Haitian migrants as “nothing new.” He also said the number of Haitians released into the U.S “could be even higher” than 12,000.

Last week, President Biden admitted the border situation is not under control:

WATCH: Joe Biden finally admits the border is not “under control” despite claiming it was in April. pic.twitter.com/xnkoX51bSM