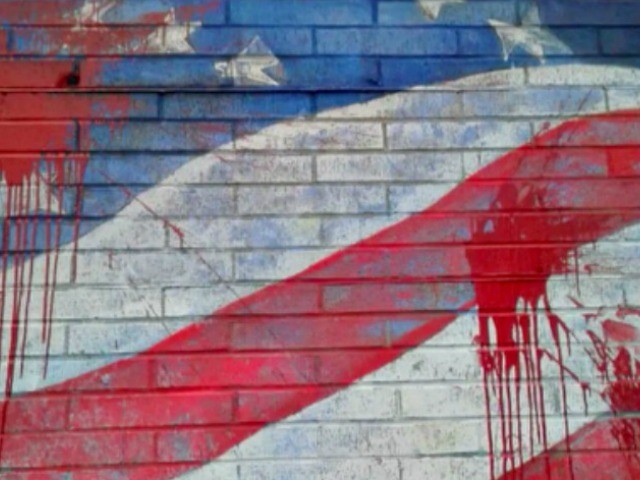 The owner of an upstate New York pizzeria said Friday that protesters vandalized the American flag mural painted on the side of her business.

Maria Lisante, the owner of La Bella Pizza Bistro in New Paltz, New York, told Fox News’ the Ingraham Angle Friday the protesters defaced the mural because “they were opposed” to what they thought was a “political position.”

“They didn’t want a flag. They thought that it meant a political position and they were opposed,” Lisante said.

A few vandals allegedly defaced the mural with splotches of red paint on Monday night, several days before the mural’s scheduled completion.

Lisante proposed the mural several weeks ago but received mixed messages from the community. A few community members opposed the mural, calling the flag “a symbol of hate and oppression,” while others rallied in support of the mural.

Some residents created a GoFundMe page with a goal of $8,000 to raise money for the project, while Lisante’s friend, Army National Guard veteran and New York state corrections officer Joey Garcia, organized an “American flag appreciation walk” on October 21 to rally support for the mural.

But not everyone was happy with the community’s overwhelming support for the American flag. A handful of Antifa protesters showed up to the appreciation walk, holding signs that read, “Yes, I’m anti-AmeriKKKan” and “Stop Pretending your Racism is Patriotism.”

Despite the vandalism, the community members behind the GoFundMe page responded in kind.

Lisante said the funds would go towards funding “paint, materials, future maintenance, and display lighting to increase visibility” for the pizzeria’s mural.

Police say they are actively investigating the incident.