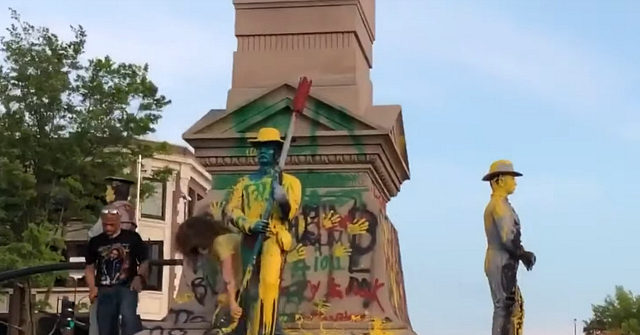 Protesters on Wednesday evening beheaded four statues on a Confederate monument in Portsmouth, Virginia, after the monument was defaced with spray paint hours earlier. A protester told on-scene reporters that an apparent demonstrator was badly injured after one of the toppled statues fell on his head.

Demonstrators began spray painting the monument after Portsmouth NAACP president James Boyd and the local organization’s vice president, Louie Gibbs, were briefly taken into custody and charged with trespassing, according to the Virginian-Pilot. Don Scott, a defense attorney for Gibbs and Boyd, told the newspaper that both local NAACP leaders were released roughly 30 minutes later on a summons.

Photos shared by Virginian-Pilot reporter Saleen Martin show the monument covered in paint with the phrases “Tear it down,” and “BLM.”

The smell of spray paint is once again filling the air as people tag the monument.

“Tear it down,” one person wrote.

Another photo shows “Fuck Trump” was written on the monument.

At one point, a protester lit a flag on fire and placed it on the monument.

The monument is on fire. Someone put the U.S. flag on top of the flames. pic.twitter.com/Ib6XIHwlx9

Later, a video showed all four statues on the monument had their heads smashed off.

All four have been beheaded tonight pic.twitter.com/uMRKFziPYb

#BREAKING Man seriously hurt after he is hit by the falling confederate soldier statue that was pulled down by protesters. What had a party atmosphere 15 minutes ago now is filled with crime tape. @WAVY_News pic.twitter.com/V8fnPy7Vky

WAVY TV 10 reporter Brett Hall reported that a man was “seriously hurt” after he is hit by the falling statue that was torn down by protesters. One protester, identified as a Black Lives Matter activist, described the incident to Hall.

There was a gentleman directly in front of the statue and when the statue finally did get [torn down], it fully hit him in the head and we could see that his skull was actually showing”

“He was convulsing on the ground and he lost quite an amount of blood,” he added. “We’re just asking for everyone to pray for that man.”

President of @BLM757 describes what he saw of the incident. He says afterwords you could see part of the mans skull. He is Asking everyone to pray for the man who believes was in his 30s @WAVY_News pic.twitter.com/Lh5vQSVtOX

A Portsmouth Police spokeswoman confirmed to WAVY that an injury occurred at the protest, but the extent of the injury is currently unknown.

The beheading of the statues came shortly after protesters in St. Paul, Minnesota, toppled a statue of 15th Century explorer Christopher Columbus outside the state’s Capitol building.

In recent days, Virginia to Jacksonville, Florida, began taking down Confederate statues. On Tuesday, protesters tore down a statue of Christopher Columbus in Richmond, while a statue of the explorer was beheaded in Boston.

Earlier Wednesday, House Speaker Nancy Pelosi (D-CA) called for statues of Confederate leaders to be removed from the Capitol.

In a letter, Pelosi told a House-Senate committee with jurisdiction over the controversial topic that Confederate statues “pay homage to hate, not heritage. They must be removed.”

The California Democrat made the announcement on the very day President Donald Trump vowed on Twitter that he would not rename military bases honoring Confederate generals. Only a short time before Pelosi’s statement, NASCAR announced it would ban displays of the Confederate flag at its races.

Confederate monuments have reemerged as a national flashpoint since the death of George Floyd, a black man who died after a white Minneapolis police officer pressed his knee into his neck for several minutes. Protesters decrying racism have targeted Confederate monuments in multiple cities, and some state officials are considering taking them down.

Pelosi lacks the authority to order the removal of the 11 Capitol statues honoring Confederates but is urging the little-noticed Joint Committee on the Library to vote to remove them. Senate Republicans share jurisdiction.

The AP contributed to this report.