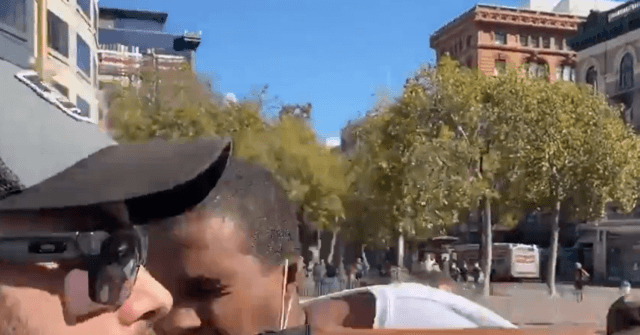 The man who allegedly punched a Black free speech advocate in the mouth before a rally in San Francisco is now faces a hate crime enhancement with his criminal charges. The alleged assault knocked out the two front teeth of Philip Anderson, the organizer of the Free Speech Rally and Protest on Saturday.

Shortly before the demonstration outside Twitter headquarters in San Francisco, Philip Anderson with Team Save America attempted to walk through a crowd of several hundred Antifa and leftist activists. The free-speech group gathered to protest Twitter’s suppression of conservative speech.

A video shot as the protest fell into chaos shows a group of Antifa attacking a Black man who appeared to be shielding one of the white conservatives. As the video streams, a man wearing black bloc suddenly appears from the left side of the screen and punches the Anderson in the face. The mob continues to chase the two men as they move to a police barricade for protection, Breitbart News reported.

The attack knocked out Anderson’s two front teeth. Voices in the crowd can be heard calling Anderson the “N” word.

On Monday, San Francisco police officials announced they arrested a 35-year-old man from Watsonville, California, in connection with the alleged assault.

Despite the arrest, police say the investigation into the attack continues.

The San Francisco Police Department refused to release a mugshot of the suspect to Breitbart News per a recent policy change.