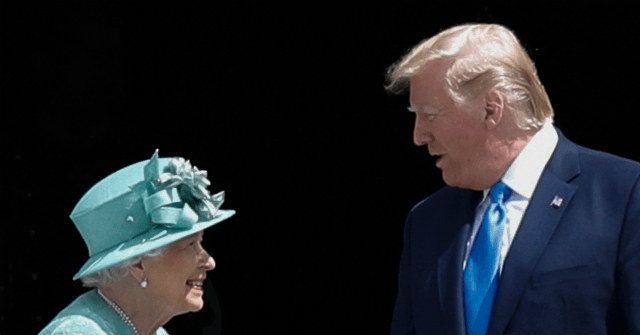 A number of British leftists have begun the ritualistic histrionics as President Donald J Trump arrived for his three-day State Visit to the UK, with some calling the President a ‘climate change denier’, “misogynist”, and a “warmonger”.

The most prominent performances of anti-Trump theatrics came from the Labour Party and its London mayor Sadiq Khan, who wrote on Sunday that President Trump was a “global threat”.

President Trump hit back early on Monday morning, even before touching down on English soil, calling Khan a “stone cold loser” and “dumb and incompetent”.

Mayor of London, @SadiqKhan has a message for @realDonaldTrump on his arrival to London about how women ought to be treated globally. ‘Dear Trump…’ https://t.co/hJ5uhS9wU6 pic.twitter.com/MwlwJu5Lpf

The latest feeble attack from Khan came via a recorded video message in partnership with women’s magazine Elle, where he asks the President to rethink “how women ought to be treated globally”.

Sad-faced and holding up a sign reading “Dear Trump”, Khan said that President Trump’s values are not the same “as London’s or this country”, saying: “We think that diversity is a strength.”

In response to President Trump’s criticisms of Khan, leader of the Labour Party and socialist Jeremy Corbyn made a rally cry on Twitter in support of the London mayor, who has overseen a dramatic rise in crime in his three years in office, for more leftists to pour into London on Tuesday for an anti-Trump protest.

The far-leftist, who will be speaking at the event, said that he would be there to support those the President had “attacked” in the U.S., “around the world and in our own country — including, just this morning, Sadiq Khan”.

Fellow Labour politicians David Lammy and Diane Abbott came to the defence of Khan, with Lammy calling the President “extreme right” and Abbott calling for more protesters to join the “Labour bloc”.

Wonder why you have a problem with London’s first ever Muslim mayor? Sadiq Khan stands taller than you ever will, in solidarity with London and more than half of Americans who reject your extreme right politics. If the polling is correct, the only loser here will be you in 2020. https://t.co/DUa8y0IjI8

Pleased to be joining Tuesday’s #TogetherAgainstTrump protest.
You can see details of the Labour bloc at https://t.co/g3a9wE3tiG
RT if you stand in solidarity with those he’s attacked in the US, around the world and in our own country – including @SadiqKhan.

However, not all in the left-wing Labour Party jumped on the Hate Trump bandwagon, with pro-Brexit, classic Labour MP for Vauxhall Kate Hoey saying she was “saddened” by the “hysterical reaction” to President Trump’s visit “by some Labour colleagues”.

Leader of the Remain-backing Liberal Democrats Vince Cable claimed that the pro-Brexit, Anglophile President Trump should not be granted a State Visit because he is “actively working against British interests” and damaging the “traditional alliance” between the two countries.

Anti-Brexit campaigner and Labour peer Andrew Andonis said it was “shameful” that neither Prime Minister Theresa May nor foreign secretary Jeremy Hunt “defended Sadiq Khan against Trump” — despite the mayor being a member of the opposition party and not sitting in government.

Tomorrow’s protest against Donald Trump’s state visit is an opportunity to stand in solidarity with those he’s attacked in America, around the world and in our own country – including, just this morning, @SadiqKhan.

Guardian opinion writer and LGBT activist Owen Jones branded the President a “racist clown” and called for the amassing of protesters to march against “racism, Islamophobia, misogyny, climate crisis, and flogging off our NHS to US multinationals”, later tweeting: “Don’t just protest against Donald Trump the man. Protest against Trumpism in this country, too — from anti-Muslim hatred to climate crisis, from misogyny to warmongering.”

The establishment media was also out showcasing its anti-Trump credentials, with Sky News posting video on Twitter announcing “he’s back” while the tiny Trump baby protest balloon — scheduled to make an appearance at tomorrow’s protest — floats above London, blotting out the sun.

.@realDonaldTrump has arrived in the UK for his three-day #statevisit.

While the “babysitter” of the balloon Anna Vickerstaff, who says she “organise[s] on climate and deportation”, told BBC Radio 4’s Today programme that the balloon represents President Trump’s “violent politics” and she believes that President Trump will take time out of his schedule to pay attention, hoping that the undersized balloon will “prick his ego”.

“This is a protest in solidarity with American people affected by Trump.