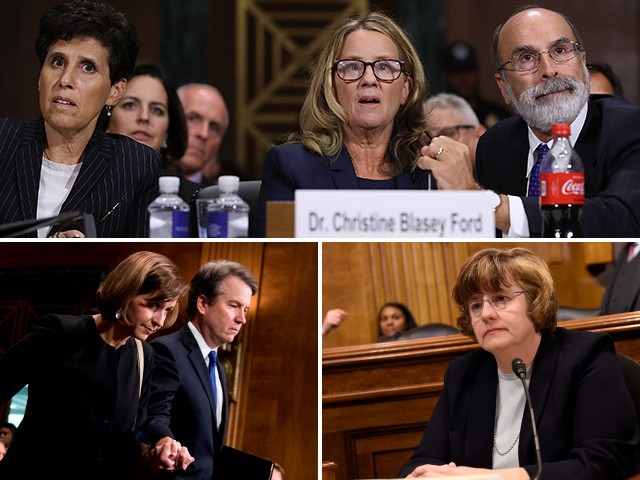 Rachel Mitchell, the veteran sex crimes prosecutor chosen by Republican members of the Senate Judiciary Committee to question Christine Blasey Ford and Brett Kavanaugh, has filed a report that points out Ford’s inconsistencies and apparent deceptions.

“In the legal context, here is my bottom line,” she writes. “A ‘he said, she said’ case is incredibly difficult to prove. But this case is even weaker than that. I do not think that a reasonable prosecutor would bring this case based on the evidence.”

She adds, “Nor do I believe that this evidence is sufficient to satisfy the preponderance-of-the-evidence standard.” This means Ford’s story does no reach the 50-50 level of more likely than not.

Mitchell Memo by on Scribd

On Sunday, Breitbart News published an extensive list of Ford’s inconsistencies, including the fact she told the Committee she is afraid to fly when the truth is that she flies frequently for both business and pleasure. Mitchell’s report is even more comprehensive, with nine different general objections (marked with underlined text) substantiated by dozens of contradicting claims and unanswered questions.

Ford’s deviations in her timeline about when the assault occurred are important. Did the event occur in the “mid-eighties” or “early-eighties,” was she in her “early teens” or “late teens,” and why did she cross out the “early” in “early 80s” in the statement for her polygraph report?

Mitchell lays it all out:

Ford’s timeline of the trauma she claims the event left her raises questions:

This is relevant because her final two years of high school were the two years immediately after the event.

Mitchell moves on to lay out how Ford’s version of what happened has been every bit the moving target as the timing of the event. “When speaking with her husband,” Mitchell writes, “Dr. Ford changed her description of the incident to become less specific.”

Now it is an attempted sexual assault.

Mitchell moves on to Ford’s “account of the alleged assault,” and how she “has not offered a consistent account[.]”

In the Feinstein letter, though, Ford makes it sound as though hearing the conversation downstairs was her signal that it was safe for her to leave the bathroom.

Mitchell then points out the glaring inconsistencies in Ford’s account of who and how many people attended the 1982 house party.

Why would Ford fail to note in her polygrapher statement that her best friend Leland Keyser was at the party, a woman who is still a lifelong friend.

Despite their friendship. Keyser maintains (under penalty of a felony) she has no memory of this house party and that she has never even met Kavanaugh.

Ford claims she cannot even remember crucial events around her polygraph test, which she took in August, less than 60 days prior to her Committee testimony:

Mitchell adds that “It would also have been inappropriate to administer a polygraph to someone who was grieving.”

Mitchell reminds the Committee that “Dr. Ford refused to provide any of her therapy notes to” them, which means we will never know the truth of anything, not only because Ford will not provide the notes, but because she claims she cannot recall if she showed the Post the actual therapist notes or her version of them.

Mitchell lays out Ford’s comments about her claim she is afraid of flying, a fear that delayed everything for a full week.

Mitchell goes on to not only lay out the facts that again point to a delaying tactic, but undercut Ford’s claim she wished to remain anonymous:

Elsewhere in her report, Mitchell points out the inconsistencies in Ford’s repeated claim she wished to remain anonymous and would have preferred a private interview:

Ford’s team turning down the Committee’s offer to have her give testimony privately, at her home in California, also delayed things.

Finally there is the issue of Ford’s three “witnesses,” all of whom refute her account.