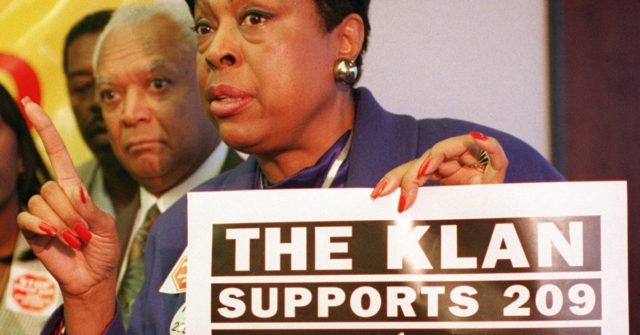 A new ad released this week by advocates for California’s Proposition 16 likens their opponents, who support existing law barring racial and gender discrimination, to neo-Nazis.

Proposition 16 is a ballot measure to overturn Proposition 209, a constitutional amendment passed by voters in 1996 that provides: “The state shall not discriminate against, or grant preferential treatment to, any individual or group on the basis of race, sex, color, ethnicity, or national origin in the operation of public employment, public education, or public contracting.”

Proposition 16 would legalize racial and gender discrimination in affirmative action policies adopted by the state of California. It was passed by Democrats in the state legislature at the height of the Black Lives Matter protests this summer.

California’s Democratic state government has given Proposition 16 an opaque ballot description that claims it “allows diversity as a factoring public employment, education, and contracting decisions.” It obscures the fact that Proposition 16 would explicitly legalize discrimination.

The new ad, “We Rise Together,” claims that Proposition 16 “takes on discrimination” (in fact, it legalizes discrimination). It notes that it is supported by Sen. Kamala Harris (D-CA), the Democratic Party nominee for vice president.

The ad then claims that Proposition 16  it is “opposed by those who have always opposed equality,” as footage of neo-Nazis marching with torches in Charlottesville, Virginia, in August 2017 is shown.

It is also vehemently opposed by Asian American communities in California, who fear they will be the primary victims of state affirmative action programs. And a recent poll showed that 47% of likely California voters oppose Proposition 16, versus 31% who support it.

Essentially, the ad is calling half the voters in California neo-Nazis.

Opponents of Proposition 209 used similar tactics in 1996, claiming that the Ku Klux Klan supported it.