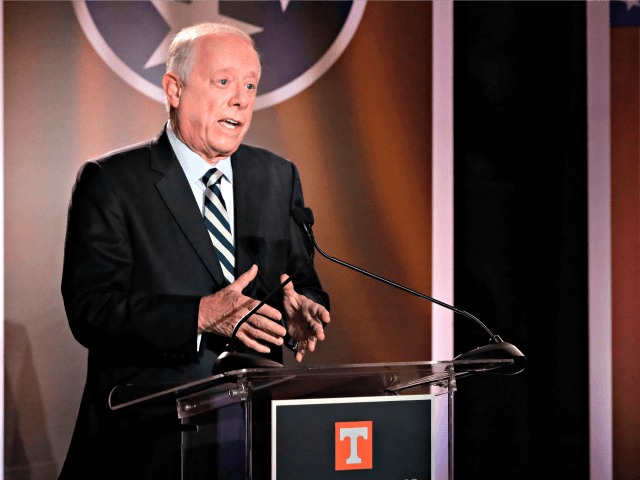 Campaign staffers for Tennessee Democrat Senate nominee Phil Bredesen say he lied on Friday when he released a statement saying he would have voted “yes” to confirm Judge Brett Kavanaugh to the Supreme Court, according to a new undercover video released by Project Veritas Action on Wednesday night.

Bredesen campaign field organizer Maria Amalla was caught on video by a female journalist sent undercover into one of the Bredesen campaign’s Nashville offices describing Bredesen’s statement on Friday as “a political move” that was necessary because “he’s trying to make up points.”

The undercover journalist told another person, identified in the Project Veritas video as Will Stewart, Phil Bredesen Campaign: “I was so confused because I just can’t believe he would actually vote yes [to confirm Kavanaugh.]”

“He wouldn’t. He’s just saying he would,” Stewart said in response.

Another exchange between the undercover journalist and a person identified as James Miller, Voter Protection, Bredesen Campaign, was equally illuminating.

“I don’t think so. Um, and I think it’s not reassuring, but it’s something that I think gives me . . . The feeling is that of reassurance, but it’s certainly not reassuring. I think much like Doug Jones, or somebody,” Miller answered.

“Who did you say?” the journalist asked.

Miller: Once you’re in, six years, you’re gonna do the right thing.

Journalist: He’ll be a good Democrat, I know he will.

Miller: 100 percent. Always has been.

Journalist: That’s the only way I can…

Miller: But, isn’t it gross?

Miller: Yeah, that’s like the way it has to go

Journalist: I just hate that he has to like lie to get that vote

Miller: I know, I know. Tell me about it. Unfortunately, that’s reality

According to the people identified by Project Veritas as Bredesen campaign staffers filmed on the video, Bredesen has misled Tennessee voters about how he views President Donald Trump as well.

“I’ld like to think in my little heart that he’s not a super fan of Trump,” the undercover journalist said on the video.

“He’s not. Between you and me, once Phil actually gets into the Senate, he’ll be a good Democrat,” Will Stewart said, adding:

Stewart: And it’s also just the start of something big, you know?

Stewart: Yeah. Yeah. We don’t say that out of these walls. But here, of course, we talk about that. Cause it’s so funny. The message is, like, don’t talk about the blue wave.

We’re not running against Trump. All this sort of stuff. Even though that’s all why we are all here. We can’t put it out there.

“I can’t help but think that Phil is the same way though,” the journalist said.

“Oh yeah. Oh, he hates Trump, like yeah. He’s not going to be running for re-election. He can get in there and do the right thing,” Stewart responded.

Those working at the Bredesen Senate campaign office in Nashville also had very clear instructions about how to “stay on message” by not discussing “the Blue Wave” or Senate Minority Leader Sen. Chuck Schumer (D-NY) with voters:

Bredesen staffer: Did you hear about that?

Staffer: Yeah, you can’t say that too often here.

Journalist: I don’t understand why, though?

Stewart: We’re allowed to say it, but it’s off message

Staffer: Yeah, the others?

Stewart: Like, campaign-wide, it’s not our message. You can say it in here, but like on those calls and stuff, that’s not a message we want to be sending. Because we’re not running…

Bredesen campaign worker Drew: We would scare all the people who would vote for Phil Bredesen but not Chuck Schumer.

Stewart: Yeah, exactly, because there’s a lot of people who are Republicans who are going to vote for him.

You can watch the full video here.