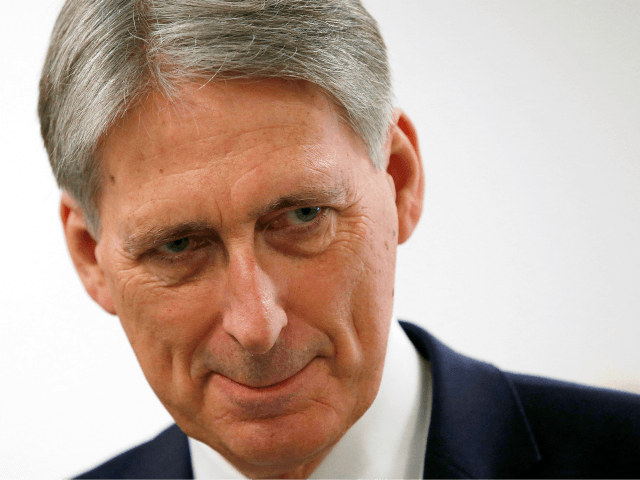 Theresa May’s anti-Brexit Chancellor has followed in the footsteps of his predecessor George Osborne, predicting Brexit will do damage to the UK economy.

Philip Hammond also claimed a ‘No Deal’ Brexit would mean higher food prices, but the assertion was quickly shot down by a pro-Brexit Tories as “inaccurate,” with other commentators accusing him of restarting “Project Fear.”

“If you look at this purely from an economic point of view, there will be a cost to our leaving the European Union because there will be impediments to our trade,” Mr Hammond told the BBC Radio 4’s Today programme.

“And reduces to an absolute minimum the [economic] impact of leaving the EU while delivering us the political benefits in being able to do third country trade deals and take control of our fishing waters.”

Conservative MEP David Campbell Bannerman hit back, insisting foot costs would, in fact, fall if the UK leaves the European Union (EU) without a trade deal.

“We can cut food and high street prices dramatically with no deal by slashing EU tariffs & buying far more from the rest of world.”

Former Tory leader Iain Duncan Smith told Sky News that “almost all financial forecast are wrong” and that Mr Hammond could not possibly accurately predict 15-20 years into the future.

Steve Baker, a former Brexit minister, was less polite, blasting: “The reputation of government economics is in the gutter. That must change.

“It’s time for the Chancellor to publish all his assumptions and full model documentation so we can begin the process of recovery.”

‘A Miscarriage of Government’ – Osborne Treasury’s Brexit Predictions out by £100 Billion https://t.co/dLIiAWKeYb

The lack of faith in government forecasts follows a series of so-called ‘Project Fear’ claims made by former Chancellor George Osborne, who said if Britain voted to leave the European Union there would be a sharp rise in unemployment, by half a million more out of a job or more.

Despite the lurid claims made by Osborne, the UK still voted to leave and unemployment is now at a record low, and wage growth is outpacing expectations.

Mr Hammond also spoke to Sky News Wednesday, revealing the Government will not publish the full legal advice it obtained on the Irish border backstop proposal covered in Mrs May’s deal, which the EU rubber-stamped over the weekend.

It is not clear and not accurate. The EU has 19,753 tariffs on goods. Like 50% on lamb, 70% on chicken, 104% on processed sugar. We can cut food and high street prices dramatically with no deal by slashing EU tariffs & buying far more from the rest of world https://t.co/yPTl1UevHl

Only a summary will be released, leading to critics claiming that keeping it private is unconstitutional.

Quizzed on what might happen if Parliament votes down Mrs May’s deal next month, Mr Hammond told the BBC that the Cabinet would consider different options, including locking the UK in the European Free Trade Association.

“All of the other options have disadvantages and we have to look not only at the economy but also the need to heal a fractured nation,” he said.

“We have to go forward after this process as a nation that is coming back together. We will not be successful if we remain a nation that is divided and fractured on this issue. It is so important that we have a solution that represents that compromise.”