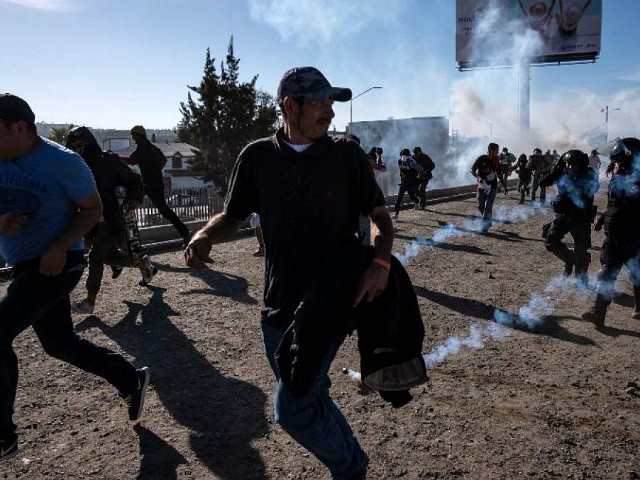 Pro-migration activist groups bitterly denounced the U.S. government’s decision to use tear gas to break up a crowd of migrants who were trying to break through a border fence to get into the United States.

The US has closed the port of entry on asylum seekers.

The last time America did this hundreds of Jewish migrants were sent back to Europe. 254 died in the Holocaust.

Now, people fleeing for their lives are tear gassed and persecuted at our border. This is unconscionable. pic.twitter.com/fEeTqLorv8

Immigration lawyer Lindsay Toczylowski tweeted about “Moms shrieking” but remained silent about the many young men trying to get through the border fence:

Tear gas and rubber bullets attacking asylum seeking families. Moms shrieking as they pour water on their kid’s burning eyes and others pushing baby strollers as they run in fear. This is America 2018. This is our government. Don’t look away, we must face what is happening.

Using tear-gas against unarmed families seeking protection of the US government is a new low. All the millions of dollars spent at border militarization these past weeks could have been used to properly process asylum seekers at the US- Mexico border! https://t.co/2s8MaYX1aL

The Department of Homeland Security explained the decision to use the tear gas:

But blocking the border is just about racism, says a Princeton professor:

This is a completely manufactured crisis driven by the racism of POTUS. It enrages me. https://t.co/NtNMzeouhx

A Democratic Senator from Hawaii suggests that the use of tear gas to protect Americans from mass migration is immoral and insane:

Anyone uncomfortable with spraying tear gas on children is welcome to join the coalition of the moral and the sane. We can argue about other stuff when we’ve got our country back.

But the tear gas was effective in pushing migrants away from the border without inflicting injuries:

Migrants seen running from tear gas at the San Ysidro border after officials say some tried to breach a fence along the border. https://t.co/Y6diZ9ez8F pic.twitter.com/swiQu28PlE

The wife of Ohio Democratic Sen. Sherrod Brown blamed border officers for the tear gas hitting children who were intentionally brought more than 1,000 miles up to the border by their own migrant parents:

The tear gas drove the migrants away from the wall without any wounds:

Migrants seen running from tear gas at the San Ysidro border after officials say some tried to breach a fence along the border. https://t.co/Y6diZ9ez8F pic.twitter.com/swiQu28PlE

This morning, CBP was forced to close the San Ysidro Port of Entry to ensure public safety in response to large numbers of migrants seeking to enter the U.S. illegally. After being prevented from entering the Port of Entry, some of these migrants attempted to breach legacy fence infrastructure along the border and sought to harm CBP personnel by throwing projectiles at them. As I have continually stated, DHS will not tolerate this type of lawlessness and will not hesitate to shut down ports of entry for security and public safety reasons. We will also seek to prosecute to the fullest extent of the law anyone who destroys federal property, endangers our frontline operators, or violates our nation’s sovereignty. CBP, along with other DHS law enforcement, federal law enforcement, the U.S. military and state and local law enforcement, will continue to have a robust presence along the Southwest Border and at our ports of entry to prevent illegal entry or violence. We continue to stay in close contact with Mexican authorities and we remain committed to resolving this situation safely in concert with our Mexican partners.

A pro-migration activist who is a former illegal immigrant used an image of a crying child to guilt Americans into opening their borders to millions of foreign migrants:

She’s been through enough! 😔 pic.twitter.com/l84ZKXRSwB

Amnesty International complained but did not say how it wanted the illegal migrants to be treated:

Families are frightened and soldiers are shooting tear gas at toddlers. We must choose to be better than this, and @realDonaldTrump expected nothing less when he deployed thousands of troops to the border with the order to shoot to kill. https://t.co/45py8jmR5Q

The U.S. government “attacks” the migrants, said another pro-migration advocate:

Ongoing: @CBP attacks #refugees seeking asylum in US as the govnt has restricted or effectively stopped processing claims at legal port of entries, forcing refugees into desperate situations and violating Geneva Convention. 5th round of tear gas now. Women and children hit too pic.twitter.com/YGQ5pB12bb

You tear-gassed women and children, asswipe! And on Thanksgiving weekend, you piece of shit, asshole, motherfucking, evil-creature-person!! https://t.co/ngaAlnhWa0

A wealthy executive at Amazon said the caravan was just a peaceful march:

This group began a peaceful march to appeal for the U.S. to speed processing of asylum claims for Central American migrants marooned in Tijuana. #MexicanBorder #immigrantswelcome https://t.co/x2qIiFqYLH

TV star George Takei had his own solution — let all of the migrants into the United States:

Folks are acting as though we had no choice but to use tear gas at our border. But we have known about this group approaching for weeks. We could have had buses and agents ready to process people in an orderly and humane way. Instead, Trump closed the border and gassed them.