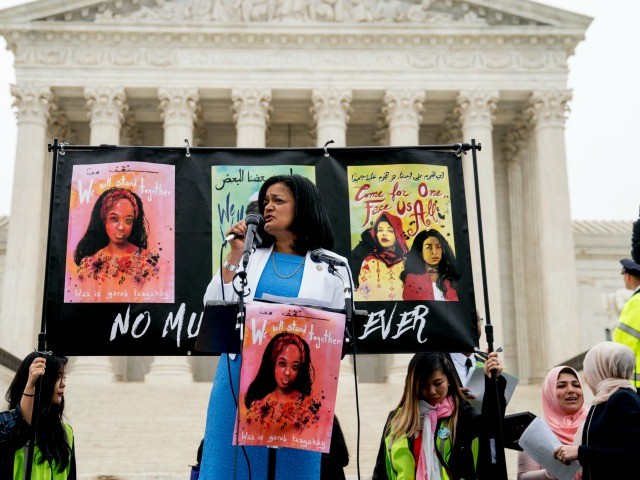 Democratic legislators want to amnesty DACA migrants, weaken border barriers and slash migration-law enforcement if they win a majority in the House, according to the New York Times.

I have notions about the easy things. To me, that’s the Dream Act [for 3 million illegals]. Some reversal of the family-separation policy [at the border]. The real question, though, is what can we do that dramatically reins in enforcement?”

Jayapal is an Indian immigrant who uses her House seat to advocate for the interests of foreigners, despite the harms done to 250 million Americans. A major share of the Americans’ wages, salaries, security and wealth have been transferred via cheap-labor migration and outsourcing up to investors, executives, privileged progressives, and government employees.

For example, Jayapal described the H-1B visa-workers who have displaced several hundred thousand American  graduates — including many in her district — as “my people.”

The article described Jayapal’s focus on migrants’ interests in her Seattle -based district:

In mid-August, I followed Jayapal through a typical day of talking to her constituents, a fast-moving schedule that included consoling a young Latino house painter who had taken refuge in a Seattle church to avoid deportation and accompanying a Mexican dance instructor and his family to the regional headquarters of ICE to request a stay in his deportation proceedings. The congresswoman had also spent much of her morning with 15 local immigration advocates. Many of them had known Jayapal for years; one had been arrested with her while protesting Obama’s deportation policies back in 2010. “I’d love to hear what you all are seeing on the ground,” she began, “but also to start to think about what next year looks like, should we take back the House. We haven’t been able to put forward a proactive immigration policy — we’ve been so reactive. So we need to show what our strategy is. We need to think about what an immigration policy looks like.”

One of her political allies said Jayapal described migrants — not citizens — as her “constituents.”

“One of the major inflection moments in the immigration rights movement was in 2009 and 2010, after waiting around for Obama to prioritize immigration reform, which he didn’t do,” recalls Deepak Bhargava of the social-justice group Center for Community Change. “And within the community, after a big debate, the decision was made to go after him.”

… “Pramila was one of the leaders who most forthrightly said, ‘We’re not about electing Democrats; we’re about representing the rights of our constituents,’ ”Bhargava recalled.

Jayapal’s demotion of Americans is sympathetically painted by the NYT as just support for immigrants.

But Jayapal and the New York Times‘ author refuse to make any distinctions between citizens, legal immigrants, illegal migrants, and non-immigrant visa-workers.

Neither do they recognize the vital distinction between Americans’ person-to-person respect for individual migrants versus Jayapal’s ideological support for the open-borders, nation-changing, wealth-shifting levels of migration sought by progressives.

The author does not mention how cheap-labor immigration is shifting a huge percentage of the nation’s wealth from the young and poor to the old and wealthy, nor how those economic shifts alarmed Americans — including many of the NYT readers who added their comments to the article — enough to elect a real-estate entrepreneur to the White House.

The NYT protected its portrayal of Jayapal by hiding the reality that progressives are aligned with Wall Street and GOP-affiliated business groups as they strongly support migration. Business groups gain when government annually supplies them with an extra 1 million cheap workers and taxpayer-subsidized consumers and renters. Some of these extra profits are cycled back to the progressive groups amid silence by establishment journalists.

But Trump’s low-migration, high-wage policies have nudged up salaries for many Americans, amid massive hostility from the D.C. establishment.