Despite freezing weather and short notice, a large group of pro-life activists turned up in Lorton, Virginia, to express outrage and opposition to Delegate Kathy Tran’s (D-Fairfax) proposed bill in the state’s General Assembly to allow abortion up to the moment of birth.

Following videos of Tran explaining that the legislation would allow abortion through the third trimester of pregnancy, and Democrat Gov. Ralph Northam explaining that a baby who survived abortion would be “kept comfortable” while his or her fate was decided, caused a backlash and the bill was tabled.

But protesters were not satisfied.

“Here’s one thing we want you to know,” Marjorie Dannenfelser, president of Susan B. Anthony List, said at the event. “If you seek to build women’s rights upon the broken bodies of American children you will fail.”

“We’re in a defining moment in this nation,” Dannenfelser said. “The almost- or just-born boy or girl is becoming visible to Americans all around the nation.”

“Now the cat is out of the bag,” Olivia Gans Turner, president of the Virginia Society for Human Life, said at the event. “We are seeing the truth once and for all.” He went on:

The veil is pulled away and we are aware that even at nine months of pregnancy these people believe it is legitimate. Delegate Tran’s heinous bill simply cast a much-needed light into the dark minds of those in the general assembly that see abortion as the ultimate good for women and who absolutely have no respect for the innocent and helpless unborn lives who perish in every single abortion. 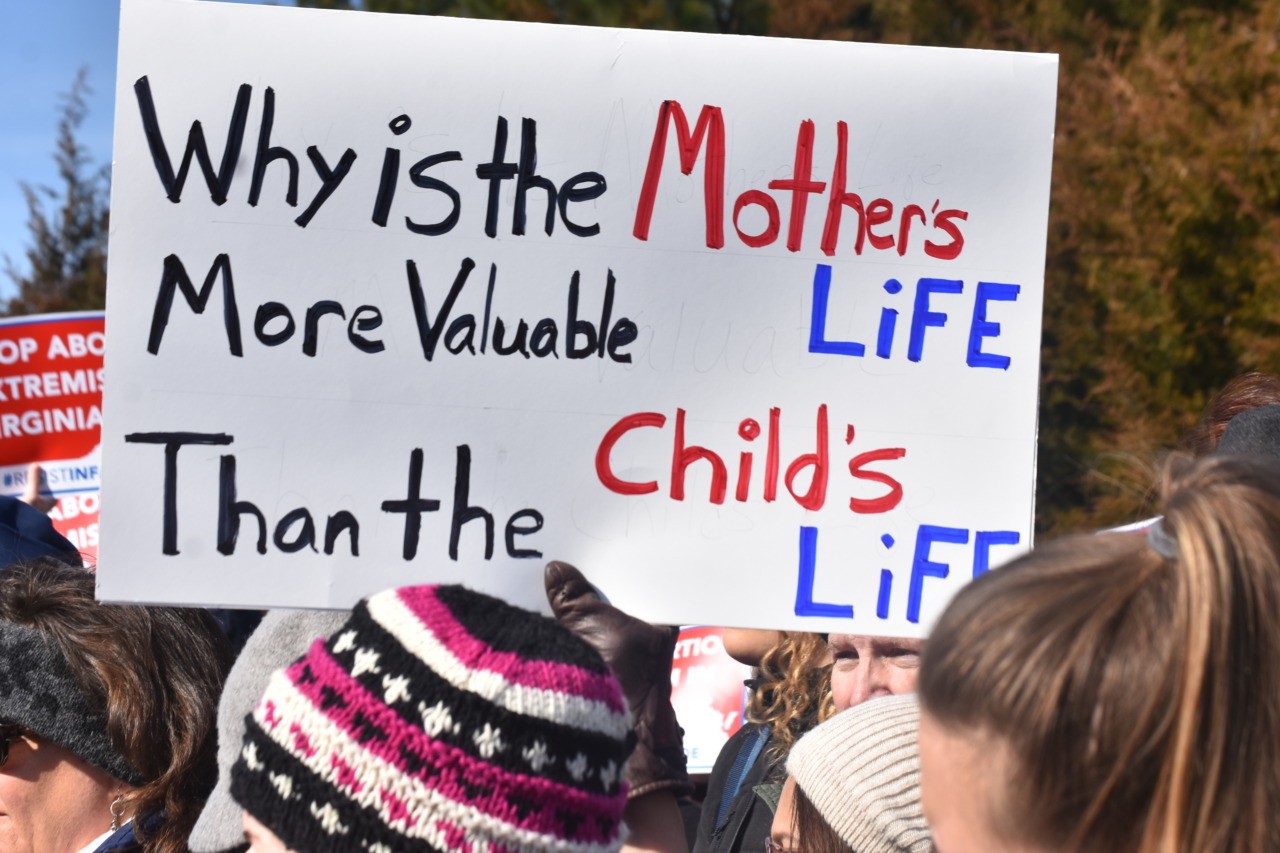 “I am one of the mothers that’s often talked about by the likes of Delegate Tran or Governor Northam,” Gans Turner said of her abortion. “And I can tell you women do deserve medical care that does not kill their babies and does not put our bodies and our minds at risk for years of anguish, physical harm, and regret.”

Chaney Mullins, programs manager at Divine Mercy Care, told the story of two sisters who both were pregnant with children that had a fatal genetic condition. One chose to have an abortion, the other chose peri-natal hospice.

“Later, the woman who had chosen abortion and regretted her decision and came back to her sister and said: You have a treasured family memory — I have a secret to keep,” Mullins said.

Some of those attending the protest told Breitbart News that hearing of the proposed law on social media brought them out to protest.

Christiane Martinez, a German who lives in Virginia, is working to become a U.S. citizen.

“I read the Constitution because I had to learn that for immigration and I want to obey the law,” Martinez said. “And I’m learning about the law and I am very confused about human rights and happiness.”

“I believe a baby is a living being and it has a whole lifetime in front of it,” Martinez said. “I do not understand that a baby that has its whole life in front of it why would you kill it and not go into the hospital and kill everybody that only has a day to live.”

“I’m very confused about coming here and then having to follow the law, but the people that are in charge and are the lawmakers are doing something like that,” Martinez said, adding that what’s going on with extreme abortion law is no different than what Hitler did in her homeland. 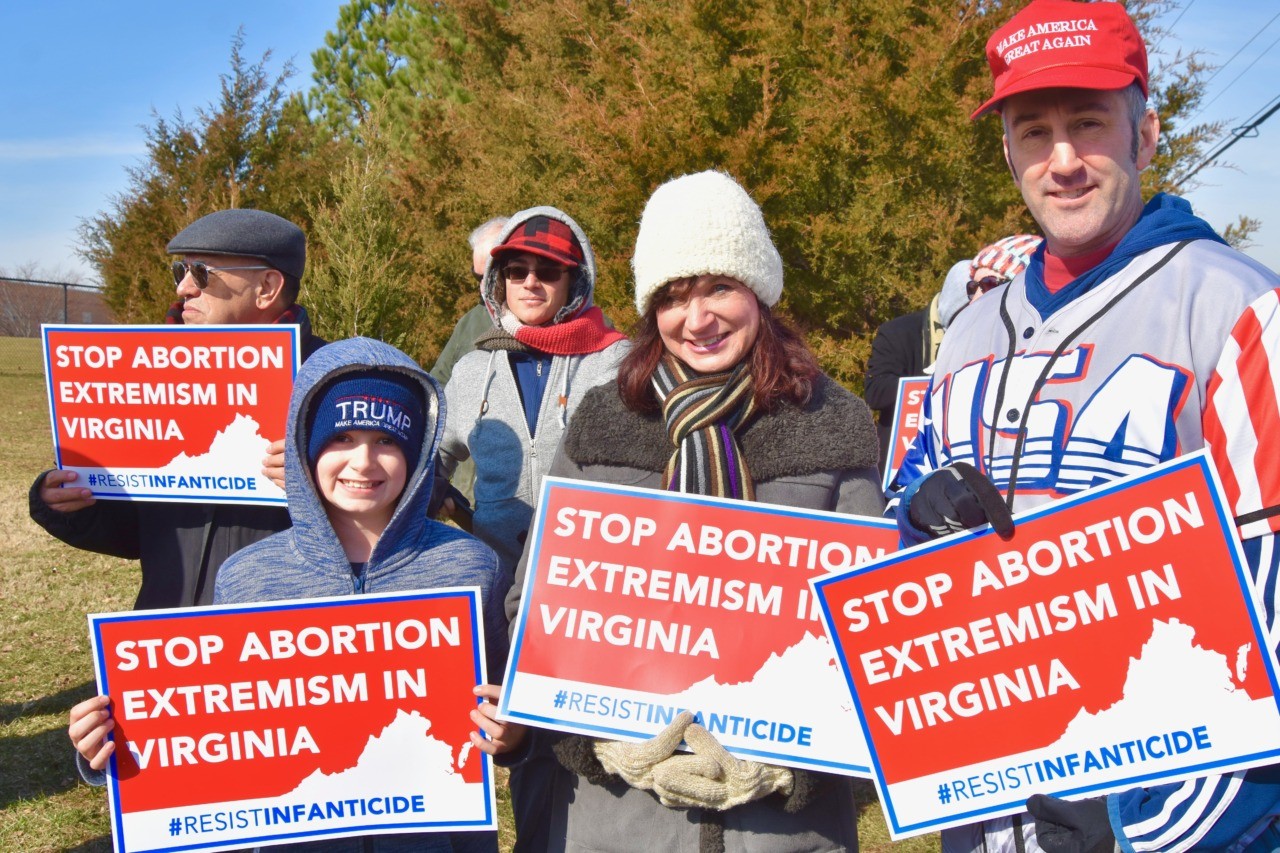 The pro-life protest in Lorton, Virginia, on Saturday, was a family affair. (Penny Starr/Breitbart News)

Tom Hazzard of Arlington, Virginia, said he has three daughters, a wife, a mother, and sisters-in-law.

“I believe in the health of the women that are unborn too,” Hazzard said. “I like to protect all life from conception to natural death. I think that everybody deserves the right to live.”

Penny Nance, president of Concerned Women for America, read off the names of the Democrats in the Virginia Assembly who co-sponsored Tran’s bill and encouraged protesters to make their voice heard at the ballot box.

Other pro-life groups represented at the event included Live Action, March for Life, Students for Life of America, the Family Foundation of Virginia, and Care Net pregnancy resource center.