CLF reported that its 2021 numbers doubled its previous off-election year fundraising record in 2019.

We’ve shattered every record this year, which is a testament to the turbo-charged enthusiasm behind our effort to win the House and stop out-of-control Democrat rule. CLF heads into 2022 with the beginnings of a war chest and firepower to expand the battlefield deep into Democrat territory and win the Majority for Republicans. These numbers are a reflection of just how much more enthusiasm there is behind Republican efforts to win the House than there is behind Democrat efforts to save it. 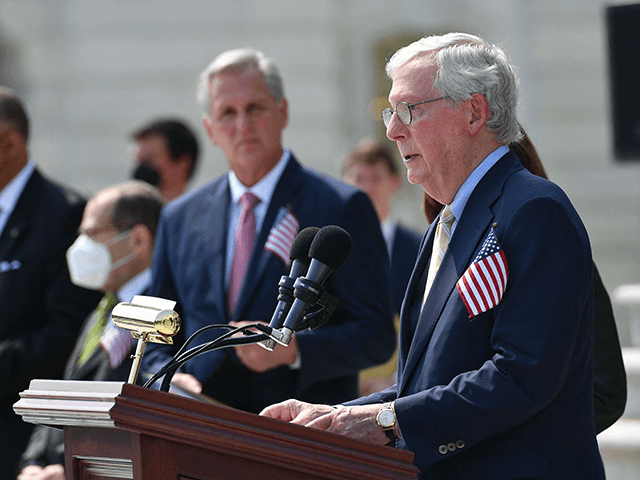 Senate Minority Leader Mitch McConnell (R-KY) speaks with House Minority Leader Kevin McCarthy and other members of Congress as they take part in a ceremony to commemorate the 20th anniversary of the 9/11 attacks on the steps of the U.S. Capitol in Washington, DC, on September 13, 2021. (Photo by MANDEL NGAN/AFP via Getty Images)

The fundraising numbers will likely continue to give the advantage to the Republican PACs. Some of the top Democrat donors reportedly told Democrat leaders Rep. Nancy Pelosi (D-CA) and Sen. Chuck Schumer (D-NY) they will not donate any more money to the party while President Joe Biden’s $1.7 trillion social spending package is stuck in limbo, according to CNBC.

However, one of Pelosi’s aides refuted the claim, telling CNBC that the House speaker is “not aware of any donor communicating that.”

With just five House seats needed to take control of the majority, Republicans hope that the enthusiasm in fundraising translates into a strong turnout for November’s midterm elections. Their chances are even greater in the Senate, with just one seat required to regain the majority.

Typically, the party in power performs worse than the opposition party during midterm elections. If these fundraising numbers are any indication, Republicans are in for a momentous victory this fall.