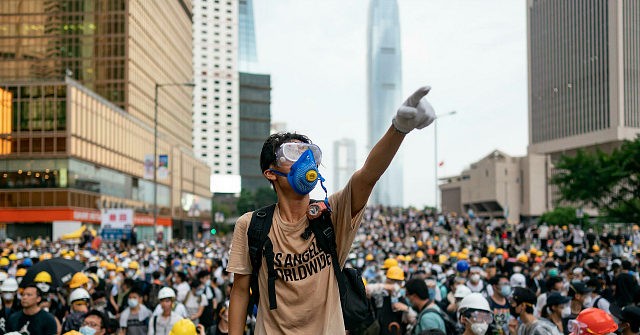 A pro-Beijing lawmaker in Hong Kong asserted that the formerly semi-autonomous city is “part of China,” whether Westerners “like it or not,” in an op-ed published by the New York Times on Thursday.

Like it or not, Hong Kong is part of China. Given the two’s vast disparity in size and Hong Kong’s growing economic dependence on the mainland [China], the city’s progressive integration with China is unavoidable.

Beijing imposed an unconstitutional “national security” law on Hong Kong on June 30, effectively stripping the city of the limited autonomy it was allowed under a “One Country, Two Systems” policy established in 1997. Under that policy – which Beijing agreed to after Britain handed the city back to China post-colonial rule – laws passed in Beijing do not legally apply in Hong Kong.

Under the national security law, people found guilty of “national security crimes,” as determined by Beijing, face a minimum of ten years in prison. The crimes include collusion with a foreign government, secession, terrorism, and the vague “subversion of state power,” designed as a catchall.

The national security law was China’s response to a powerful pro-democracy movement launched in Hong Kong last June, which protested Beijing’s increasing infringement on the city’s limited rights. The protests initially objected to a proposed law that would have allowed the extradition of people present in Hong Kong into Beijing, a violation of “One Country, Two Systems.” The “national security” law makes the extradition unnecessary, imposing communist rule within Hong Kong’s borders.

Protests in Hong Kong are ongoing over a year later. So far, Hong Kong police have arrested dozens of pro-democracy protesters under the new law. Police have faced a large number of accusations of brutality against protesters, some as young as 13 or well into their 70s, including public beatings, excessive use of tear gas and pepper spray, and, in at least one case, blinding protesters.

A staunch proponent of the legislation, Ip hailed the law’s passing on Tuesday as having brought peace to Hong Kong following the allegedly “violent” pro-democracy movement, without mentioning any accusations of brutality on the part of policy.

“Something had to be done, and the Chinese authorities did it,” she wrote of the subsequent police crackdown on protesters.

“The West tends to glorify these people as defenders of Hong Kong’s freedoms, but they have done great harm to the city by going against its constitutional order and stirring up chaos and disaffection toward our motherland,” Ip asserted.

“From Beijing’s point of view, democratic development in Hong Kong has brought about nothing but chaos, polarization, and anti-China sentiment,” she added.

In addition to her role as a Hong Kong legislator, Ip currently serves as the chairwoman of the city’s New People’s Party, a pro-Beijing conservative political party. She formerly served as Hong Kong’s Security Secretary.

The New York Times itself has also featured content favorable to communism, an ideology that has killed over 100 million people. The most notorious examples are its coverage of Stalin’s mass starvation of Ukrainians, which it denied was occurring, and reports from the Sierra Maestra falsely depicting failed politician Fidel Castro as popular, well-armed, and poised to take over the country prior to the Cuban Revolution.

More recently, the New York Times has published reports seemingly sympathetic to the brutal communist dictatorship in North Korea and an opinion piece bizarrely claiming that socialism improved the sex lives of the women it oppressed in the Soviet era.