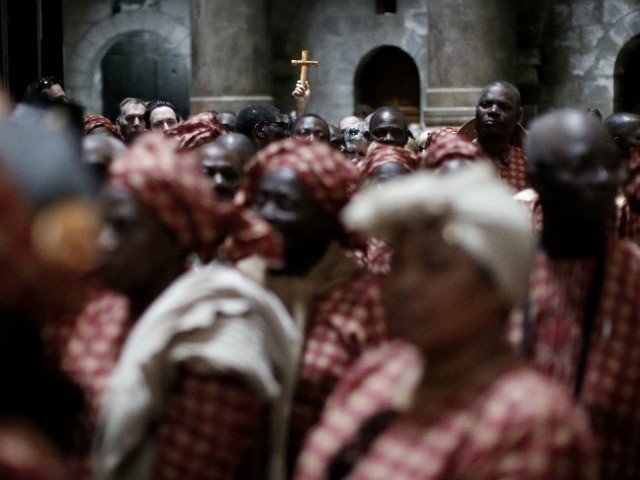 Nigeria has failed to protect Christians under siege by Boko Haram and other jihadists, pro-Christian groups argued in a letter this week, urging U.S. lawmakers to officially deem the African nation guilty of severe religious freedom violations.

“We urge you to use the levers and powers of American ideals and diplomacy to urge a solution to the crisis affecting Christians and demand that Nigerian President Muhammadu Buhari move immediately to protect Nigerians, particularly Christians,” the letter, obtained by Breitbart News, states.

Addressed to members of the House Foreign Affairs Committee, the December 13 letter was signed by Jon Schweppe, the director of government affairs at the U.S.-based American Principles Project; Thompson Ayodele, the director of the Nigeria-based Initiative for Public Policy Analysis; and Adebayo Temidayo, the general secretary of the Saint Raphael Catholic Society in Nigeria.

Christians in Nigeria are facing a “deepening crisis” involving their safety and security, the signatories declared.

Boko Haram jihadis and Fulani herdsmen terrorists have repeatedly attacked followers of Christ, prompting some Nigerian Christian groups to urge their brethren to take up arms to defend themselves, given the inaction by the Buhari administration.

President Buhari, who shares his ethnicity with the Fulani group, has been accused of downplaying and even condoning the Muslim group’s attacks.

We write to you today to raise concerns over the deepening crisis involving the safety and security of Nigeria’s Christian community, and urge this Committee to recommend the U.S. Department of State consider classifying Nigeria as a “Country of Particular Concern” for religious freedom. … In our view, the U.S. Government should seriously consider Nigeria for inclusion as a “Country of Particular Concern” due to the ongoing violence, persecution, intimidation, and assault on Christians and other people of faith. It is disappointing that Nigeria was not included in the Secretary’s announcement this week.

Boko Haram violence has led to the death of “more than 1,078 people” in eight Nigerian states between January and March of this year – “a number that has only continued to grow,” the pro-Christian group leaders wrote.

This week, U.S. Secretary of State Mike Pompeo announced that the American government would officially deem several countries along with terrorist organizations like Boko Haram as “entities or countries of particular concerns” under the International Religious Freedom Act of 1998.

“This is a positive and welcomed development. Boko Haram has terrorized Nigeria for far too long, and has left in its wake a trail of destruction and tears,” the letter notes, adding, “It is disappointing that Nigeria was not included in the Secretary’s announcement this week.”

In a statement, Pompeo declared:

In far too many places across the globe, individuals continue to face harassment, arrests, or even death for simply living their lives in accordance with their beliefs. The United States will not stand by as spectators in the face of such oppression. Protecting and promoting international religious freedom is a top foreign policy priority of the Trump Administration. … These designations are aimed at improving the lives of individuals and the broader success of their societies. I recognize that several designated countries are working to improve their respect for religious freedom; I welcome such initiatives and look forward to continuing the dialogue.

State notifies Congress of its “Country of Particular Concern” designations on an annual basis. U.S. government officials are known to use sanctions to pressure countries to change their behavior once all non-economic means are exhausted.