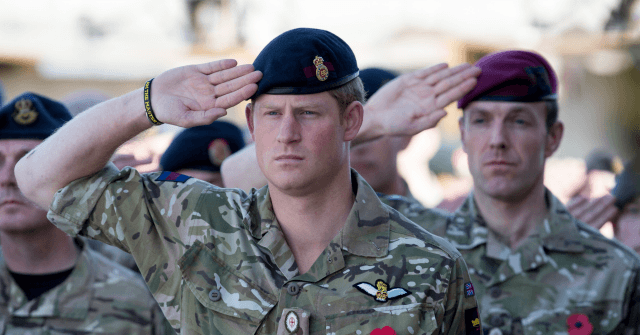 Prince Harry will no longer formally represent the Crown as patron of three branches of the British military after officially stepping back from royal duties.

The statement from Buckingham Palace released on Saturday night detailed that Harry and Meghan will relinquish their HRH titles, are to no longer receive public funds through the Sovereign Grant, and “are required to step back from Royal duties, including official military appointments”.

Prince Harry is an Army veteran who served twice in the theatre of war in Afghanistan before retiring after ten years. He was also patron to three of the United Kingdom’s armed services: Honorary Air Commandant of Royal Air Force Honington, Commodore-in-Chief of the Royal Naval Command’s Small Ships and Diving group, and Captain General of the Royal Marines.

The latter role he had inherited from his 98-year-old grandfather, the Duke of Edinburgh Prince Philip, who had retired the position at the age of 96 after 46 years as patron.

The Monarch, Queen Elizabeth II, is head of the Armed Services and patronage forms part of royal duties, which Buckingham Palace confirmed on Saturday that the prince had relinquished.

Former First Sea Lord, Lord West, told ITV news of the announcement: “The whole situation is extremely sad and I think it is unfortunate, after his splendid service in the military, that he will now no longer be involved with the military in the UK.”

However, the rank and file had not all expressed sadness in recent days over the prospect of the prince stepping back from military duties. There was reported a particular controversy over his position as Captain General of the Royal Marines.

After he and his wife Meghan announced their intention to step back as “senior” royals two weeks ago, reports revealed that the prince rarely kept in touch with the Commando Brigade, and that, according to a senior military source, “has not been seen for some months”.

One Marine had remarked on the frustration felt that Harry had simply been handed the role in 2017 without earning it, saying: “A lot of lads were not impressed that he was just given a beret and his commando badges yet he did nothing for them, not one run, nothing. He won’t be missed.”

Before Saturday’s announcement, reports revealed that other members of the Armed Services have expressed their lost respect for Prince Harry over his treatment of his 93-year-old grandmother, The Queen.

Captain James Glancy, a veteran of the Special Boat Service (SBS), told Nigel Farage on LBC radio this week: “I’ve spoken to other Royal Marines and other people in the military and they’re very upset, if not disgusted, at the disrespect to the Queen by not discussing [with her his plans with Meghan].

“If he wants to leave those positions, if he wants to go abroad with his wife, he’s absolutely entitled to have another life and he’s entitled to live overseas. But you can’t do this half and half. You’re either in or you’re out.”

Prince Harry is expected to continue his work with the Invictus Games, a sports competition he founded in 2014 for sick and injured servicemen and veterans.