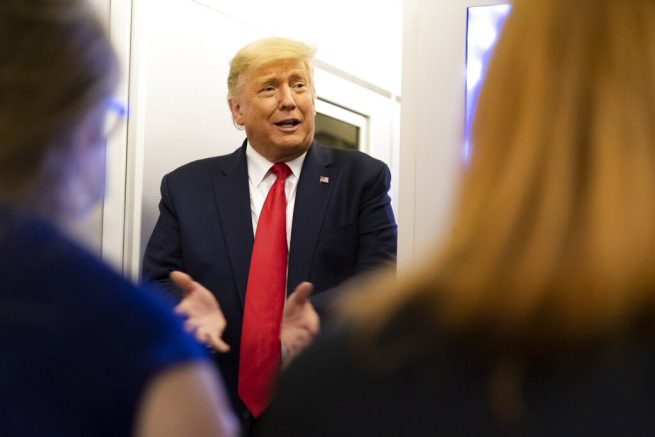 President Donald Trump speaks with reporters while in flight on Air Force One after a campaign rally at Tucson International Airport, in Tucson, Ariz., Monday, Oct. 19, 2020, while en route to Andrews Air Force Base, Md. (AP Photo/Alex Brandon)

President Trump pushed back against the mainstream media for their alleged biased coverage of the upcoming election. He took a stand against reporting bias by pointing to repeated instances in which the mainstream media extended preferential treatment to Joe Biden’s campaign.

While speaking to reporters in Prescott, Arizona on Monday, the President rebuked the recent coverage of his bid for reelection while citing the selection of pundits with a history of bias against him to moderate presidential debates.

NBC’S Savannah Guthrie has been the subject of widespread condemnation among conservatives over her aggressive demeanor during a town hall event last week in which she repeatedly interrupted the President and leveled a number of unfounded accusations against him.

Joe Biden is a corrupt politician, and everybody knows it. Now you have the proof, perhaps like never was had before on a major politician. Laptop plus. This is the second biggest political scandal in our history!

Moving on from debates specifically, the President also addressed the way recent allegations of corruption perpetrated by the Biden family have been covered by the mainstream media, which he stated has failed to sufficiently report on the issue due to their blind support of the Democrat nominee.

“Joe Biden is a criminal and he’s been a criminal for a long time,” stated President Trump. “And, you’re a criminal in the media for not reporting it.”