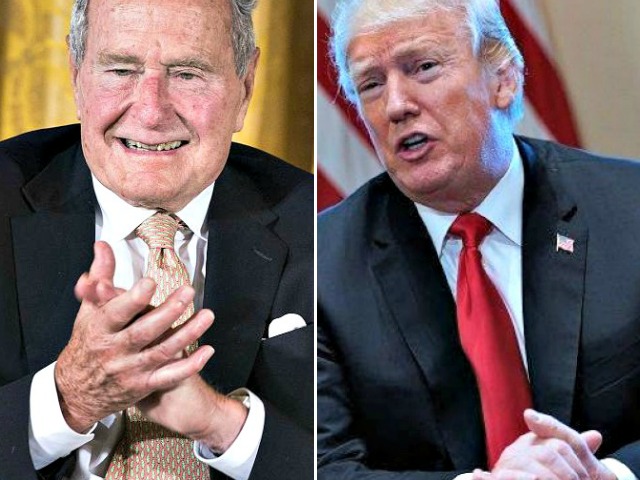 The first couple praised the United States’s 41st commander-in-chief as an “accomplished” and “humble” leader who demonstrated “unwavering commitment” to “faith, family, and country.”

“President Bush inspired generations of his fellow Americans to public service—to be, in his words, “a thousand points of light” illuminating the greatness, hope, and opportunity of America to the world,” President Donald Trump and first lady Melania Trump’s statement reads.

Read the full statement below:

Melania and I join with a grieving Nation to mourn the loss of former President George H.W. Bush, who passed away last night.

Through his essential authenticity, disarming wit, and unwavering commitment to faith, family, and country, President Bush inspired generations of his fellow Americans to public service—to be, in his words, “a thousand points of light” illuminating the greatness, hope, and opportunity of America to the world.

President Bush always found a way to set the bar higher. As a young man, he captained the Yale baseball team, and then went on to serve as the youngest aviator in the United States Navy during the Second World War. Later in life, he rose to the pinnacle of American politics as a Congressman from Texas, envoy to China, Director of Central Intelligence, Vice President of eight years to President Ronald Reagan, and finally President of the United States.

With sound judgement, common sense, and unflappable leadership, President Bush guided our Nation, and the world, to a peaceful and victorious conclusion of the Cold War. As President, he set the stage for the decades of prosperity that have followed. And through all that he accomplished, he remained humble, following the quiet call to service that gave him a clear sense of direction.

Along with his full life of service to country, we will remember President Bush for his devotion to family—especially the love of his life, Barbara. His example lives on, and will continue to stir future Americans to pursue a greater cause. Our hearts ache with his loss, and we, with the American people, send our prayers to the entire Bush family, as we honor the life and legacy of 41.

Bush’s passing comes just months after the death in April of his wife and revered first lady Barbara Bush — his “most beloved woman in the world” — to whom he was married for 73 years.

The 41st American president was a foreign policy realist who navigated the turbulent but largely peaceful fall of the Soviet Union in 1989 and assembled an unprecedented coalition to defeat Iraqi strongman Saddam Hussein two years later.

But the decorated war pilot and former CIA chief suffered the ignominy of being a one-term president, denied a second term over a weak economy when he lost the 1992 election to upstart Democrat Bill Clinton.

His favoring of stability and international consensus stands in sharp contrast to the provocative bluster of fellow Republican and current White House occupant Donald Trump, a man for whom Bush did not vote in 2016.

Bush presided over economic malaise at home and infuriated his fellow Republicans during a budget battle with rival Democrats by famously breaking his vow: “Read my Lips: No new taxes.”

But he was the respected patriarch of a blue-blood political dynasty — son George spent eight years in the White House, and son Jeb served as governor of Florida.

At the time of his death, Bush was the American president to have lived the longest.

The Agence France-Presse contributed to this report.