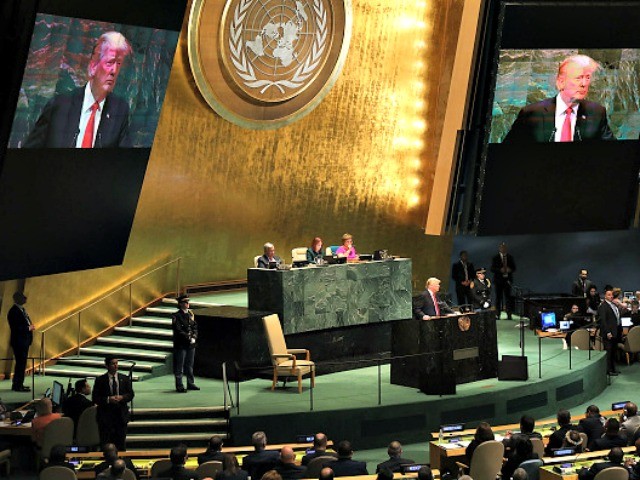 President Donald Trump delivered a sharp rebuke to globalism, while touting the virtues of America First, during his highly-anticipated address before the United Nations General Assembly Tuesday.

Speaking in triumphal terms, President Trump approached the address as an annual report to the world on his country’s progress since his inauguration. The president touted economic figures, declared that the U.S. military is “more powerful than it has ever been before,” and asserted that in “less than two years, my administration has accomplished more than almost any administration in the history of our country.”

President Trump said the U.S. rejects “global governance, control, and domination” and honors the right of every nation to pursue its own customs, beliefs, and traditions, adding that it will never tell other nations how to live, work, or worship.

In addition to the keynote speech, President Trump is to chair a meeting of the U.N. Security Council on the topic of countering nuclear proliferation on Wednesday.

He referenced a long list of U.N. initiatives, from the International Criminal Court to the Human Rights Council, that his administration is working to counter.

“As far as America is concerned, the ICC has no jurisdiction, no legitimacy and no authority,” he said. The U.S. is boycotting the Human Rights Council, arguing it overlooks abuses by some and serves as a venue for anti-American and anti-Israeli action.

“The U.S. will not tell you how to live and work or worship,” President Trump said. “We only ask that you honour our sovereignty in return.”

“We reject the ideology of globalism and we embrace the doctrine of patriotism,” he added.

“Virtually everywhere socialism or communism has been tried, it has produced suffering, corruption, and decay,” President Trump said. “Socialism’s thirst for power leads to expansion, incursion, and oppression.”

“We ask the nations gathered here to join us in calling for the restoration of democracy in Venezuela,” the president added.

President Trump hailed the agreement a “very big deal” and said the new deal makes significant improvements to reduce the trade deficit between the countries and create opportunities to export American products to South Korea.

In both venues, U.S. officials say, President Trump is expected on Wednesday to offer a contrast between the path of negotiation chosen by North Korea and that of Iran. The president earlier this year fulfilled a core campaign promise by removing the U.S. from the 2015 Iran nuclear deal, citing the Islamic regime’s malign influence in the region and support for terror groups like Hezbollah. The next round of tough sanctions on Iran is set to go into effect in November.