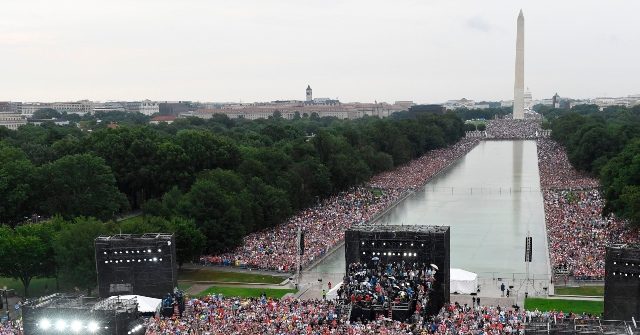 President Donald Trump noted the “great crowd” that attended the Salute to America celebration honoring the United States military on the Fourth of July.

“A great crowd of tremendous Patriots this evening, all the way back to the Washington Monument,” he tweeted.

Attendees with tickets were admitted into the area around the Lincoln Memorial and half-way down the reflecting pool around 3 p.m. ET. Heavy rain commenced around 3:30 p.m. ET. The rain lasted for approximately two hours before abating before the celebration began at 6:30 p.m. ET.

Despite the rain — the entire area around the reflecting pool was packed by the time the celebration started.

A great crowd of tremendous Patriots this evening, all the way back to the Washington Monument! #SaluteToAmerica🇺🇸 pic.twitter.com/nJghdfqIhX

The massive crowd size was also noted by others on social media:

Viewers of the event on C-SPAN also commented on how the network was showing the large crowd, with one viewer posting a screenshot shortly after the event began:

Besides FoxNews and OAN , C-SPAN only media showing the HUGE crowd in DC at President Trump’s 4th of July “Salute to America’s” speech. Even the pouring rain could not hinder the massive crowd stretching from the Lincoln Memorial to the Washington Memorial and beyond. #MAGA2020 pic.twitter.com/jtNMqHJwgt