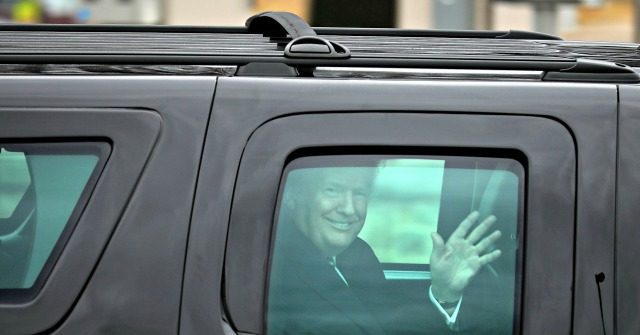 Press cameras filmed the president as he descended the stairs, lightly touching the handrail.

One reporter shouted a question at the president, asking if he was a “super-spreader” of the coronavirus. Trump, wearing a mask, did not respond, but said, “Thank you,” to the press and flashed a thumbs-up sign.

The president and all members of the Secret Service wore masks as they entered an armored SUV and drove to the landing zone where Marine One was waiting.

The president boarded the helicopter and it took off at 6:44 p.m.

BREAKING: Pres. Trump gives a thumbs up as he leaves Walter Reed Medical Center, where he was admitted Friday after testing positive for COVID-19.

The president did not answer a shouted question about others in his orbit who have tested positive. https://t.co/ycPCDibArs pic.twitter.com/YhMl1sC4P5