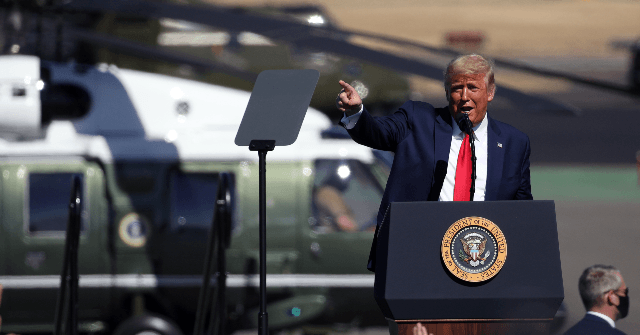 During his Monday rally in Prescott, Arizona, President Trump warned that Democrat Senate candidate Mark Kelly will “vote to take away your guns” if elected.

Trump looked out at the crowd in Prescott and described Kelly as “bad news,” suggesting Kelly is only a good option for people who do not like the Second Amendment.

Trump said, “[Kelly’s] a radical leftist and he’s going to vote to take away your guns. And somehow, Arizona and no guns don’t seem to match up too well.”

On April 20, 2020, Breitbart News reported that Kelly was not mentioning his support of stringent gun control during campaign stops in Arizona.

For example, his stops had not included a mention of his support for universal background checks, even though such checks would impact Arizonans greatly by expanding the occurrence of the point-of-sale checks that now apply to all retail sales. But Kelly wants to expand them so as to include private sales, too. This would mean that a neighbor could not legally sell a gun to a lifelong neighbor unless first getting government permission via a background check; it means one coworker could not sell a five-shot .38 revolver to another coworker, even if they have known each other for decades, unless the buyer got government permission via a background check.

Breitbart News quoted McSally saying, “I’m your Second Amendment senator. I think I’ve shot the biggest gun of anyone in Congress, in the 30 mm on the A-10, and our constitutional rights are at risk right now. And counterfeit Kelly can say, ‘I’ve got some guns,’ but make no mistake, the agenda of the people he has supported — to include people like ‘Beto’ O’Rourke and others — they’re coming after our Second Amendment rights right now.”