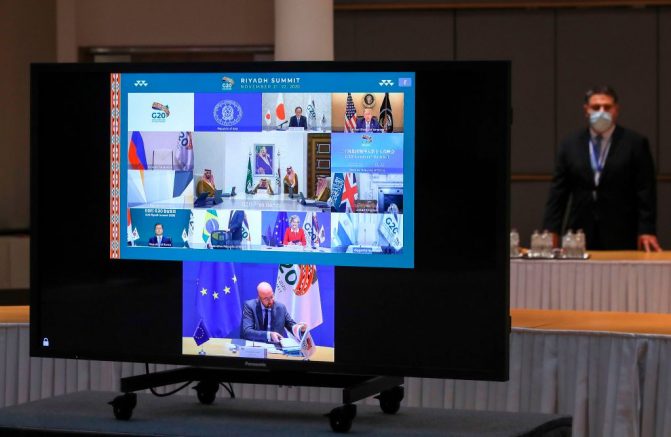 The President delivered remarks on the final day of the G-20 Summit event.

Just arrived at Virtual G20. Was here yesterday also (early), but some of the Fake News Media failed to report it accurately – as usual. My speech is available (they said I didn’t make a speech).

Sunday marked the close of the 2020 summit. President Trump touted his administration’s move to pull out of the Paris Climate Accords and enter the Great American Outdoors Act.

“Under my administration, environmental stewardship is a sacred obligation,” the President said. “Over the last four years, we have made incredible strides to ensure that the United States has among the cleanest air and cleanest water on the planet.”

He addressed the issues surrounding the Paris Accords, which included the unfair strain on the U.S. while making every day life harder on American workers.

“I refused to surrender millions of American jobs and send trillions of American dollars to the world’s worst polluters and environmental offenders,” President Trump stated. “That’s what would have happened. Since withdrawing from the Paris Accord, the United States has reduced carbon emissions more than any nation anywhere in the world.”

The President also discussed the U.S.’s efforts to work toward a healthy environment while boosting the American economy.

“Our air is seven percent cleaner than when I took office,” he added. “At the same time, we’ve made America energy independent, bolstered by our historic tax and regulatory cuts, the United States is now the number one producer of oil and natural gas in the world.”

President Trump concluded by saying his administration will continue to put America first, while also working with the world’s leaders to make even more progress.

“Every day we are proving that we can protect our workers, create new jobs, and safeguard the environment without imposing crippling mandates and one-sided international agreements on our citizens,” the President noted. “The United States and the G-20 nations have a tremendous opportunity to continue to build on this incredible progress.”

The President also took part in the discussions surrounding pandemic preparedness. He stated he intends to continue his work with international leaders in every way he can.