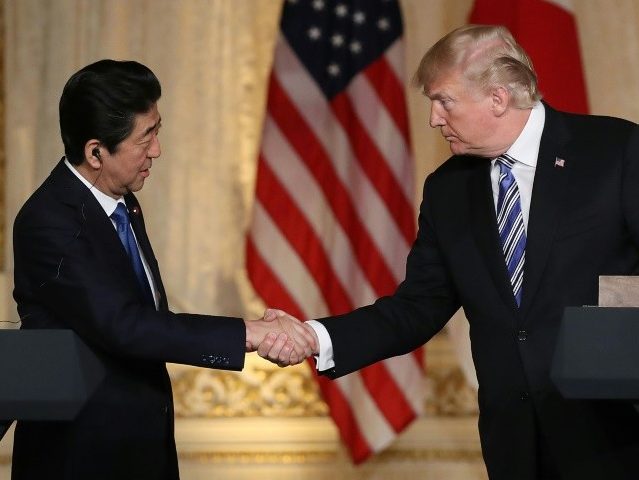 The United States and Japan announced Wednesday at the United Nations General Assembly in New York that the two nations will be pursuing a mutually beneficial trade agreement.

President Donald Trump and Japan’s Prime Minister Shinzo Abe met in New York in recent days on occasion of the United Nations General Assembly meetings in New York. There they issued a joint statement which “affirmed the importance of a strong, stable, and mutually beneficial trade and economic relationship between the United States and Japan, recognizing that [their] economies together represent approximately 30 percent of global Gross Domestic Product”

The two leaders reaffirmed their commitment to expand trade and investment between the two nations “in a mutually beneficial manner, including through further concrete steps, as well as to realize free, fair, and open development of the global economy.”

Each country will respect each other’s positions on specifically identified positions as they pursue a mutually beneficial trade agreement. U.S. commitment to “increase production and jobs in the United States in the motor vehicle industries” is to be respected. “For Japan, with regard to agricultural, forestry, and fishery products, outcomes related to market access as reflected in Japan’s previous economic partnership agreements constitute the maximum level,” the statement details.

“The United States and Japan will also strengthen cooperation to better protect American and Japanese companies and workers from non-market oriented policies and practices by third countries,” the statement went on.

The two nations committed to conduct negotiations “based on mutual trust, and refrain from taking measures against the spirit of this joint statement during the process of these consultations.” It further committed the nations to expediently resolve tariff-related matters.