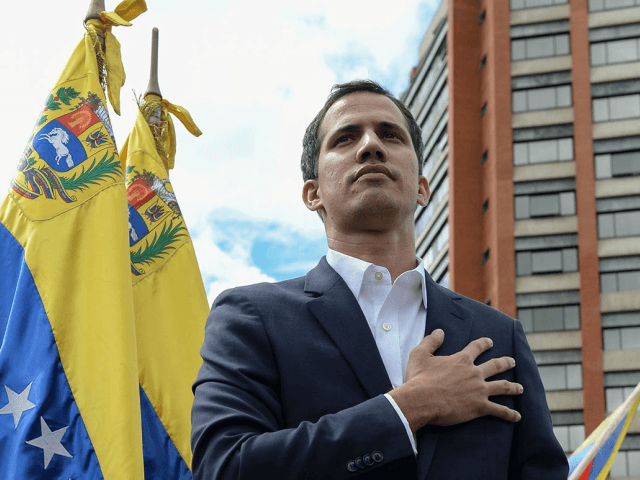 Interim President Juan Guaidó of Venezuela unveiled what he called the “Plan País,” or “Nation Plan,” on Thursday, his policy prescription for ending the humanitarian crisis in the country created by two decades of socialist policies.

Guaidó became president after taking an oath of office last week, replacing socialist dictator Nicolás Maduro, who has refused to leave the presidential palace. As Maduro assumed his latest term in office following an election universally considered fraudulent, the Venezuelan constitution mandates that the National Assembly, the federal legislature, replace him with an interim president tasked with organizing free and fair elections.

Upon assuming the presidency, Guaidó made his priority requesting international humanitarian aid, which Maduro had for years rejected, claiming that the United States and other Western powers would sneak soldiers onto aid convoys. Venezuela is facing a near-complete shortage of all medicines needed to run a functional healthcare system, as designated by the World Health Organization, and an estimated 80 percent of Venezuelans do not have access to the amount of food necessary to maintain their weight. The average Venezuelan lost 24 pounds involuntarily in 2017, the latest year for which statistics are available.

Guaidó also demanded that the armed forces no longer follow Maduro’s orders, as he is no longer president. Maduro has maintained control over the higher levels of the military, using force to subdue peaceful pro-democracy protests.

Amid the turmoil, Guaidó had not yet issued any policy proposals outside of removing Maduro and feeding Venezuelans. That changed on Wednesday with the unveiling of the “Plan País.”

The plan consists of three key elements: social renewal, economic renewal, and control of petroleum supplies. Guaidó and his team described the social aspect of the plan as “returning to Venezuela the ability to live off of their work.” First, the government would create 11 social programs, all part of a larger social security plan, that would help Venezuelans back on their feet.

The economic plan would consist of government subsidies to “every family that needs them,” as well as heavy investment in government education and health care.

The petroleum plan saw Guaidó’s government vow to return Petróleos de Venezuela (PDVSA), the state-run oil company, to pre-socialist production levels. The opposition team promised not to privatize the industry, but to return it to the hands of capable oil experts who can adequately find and process the crude oil. Under dictator Hugo Chávez, PDVSA’s management was largely expelled and replaced by Chávez’s socialist cronies, who had minimal experience in the oil industry. Maduro continued the policy, leaving the nation with the world’s largest known oil reserves forced to import oil to survive.

Venezuela’s economy is arguably the world’s worst, currently home to the world’s highest inflation rate (1.7 million percent) and plagued by outstanding debts to rogue nations like China and Russia. It is an intensely resource-rich nation, however, particularly in oil and gold, which is where Guaidó expects to generate the funds for his major social security project. Rather than hand out Venezuelan oil for free to nations like Cuba, Venezuela will expand its production and sell those resources on the market, then the government, he argued, will invest it into social programs.

Guaidó told the audience that the plan was partially drafted by Leopoldo López, the leader of his Popular Will party and a political prisoner in Venezuela for the past four years.

Popular Will is one of Venezuela’s largest opposition parties and a member party of the Socialist International. Its party manifesto states that it accepts government-provided food, shelter, and education as basic human rights and has condemned Maduro to not investing sufficient government funding into social programs for the poor. Despite this, Maduro loyalists and radical Marxists in the West have attempted to brand Guaidó a conservative or right-wing politician, without highlighting any policy proposals that reflect this ideology.

Guaidó made clear on Thursday that he considers the reintegration of the Venezuelan armed forces into his legitimate government a key issue in rehabilitating the country. His supporters have printed out and begun distributing to low-level troops a four-page pamphlet explaining the National Assembly’s amnesty law, which allows soldiers to defect to Guaidó and not face prosecution for any human rights abuses they may have committed under Maduro’s orders. Guaidó has gone as far as to say that he would consider offering Maduro himself amnesty if he steps down and allows Popular Will to take over and organize free elections.