President Donald Trump honored angel families during his Rose Garden emergency declaration Friday as he pointed to the deadly consequences of an unsecured border.

The president highlighted “an invasion of our country with drugs, with human traffickers, with all types of criminals and gangs.”

“We have some of the greatest people I know, they’ve been with me from the beginning of my campaign, almost from the first week,” the president said as he turned attention to angel moms and families, some of whom were seated there in the Rose Garden for the announcement.

“Unfortunately we have new angel moms,” said Trump. He recalled a meeting with them just prior to the announcement. He remarked to one that he had not seen her before and she said she was new. He said, “That’s too bad.”

“It’s too bad. It’s so sad,” said Trump. He had that mom, Susan Stevens, stand and hold up a photo of her daughter Toria who died in January 2018 of a drug overdose.

“I have such respect for these people, angel moms, angel dads, angel families,” said Trump. “They’re fighting for their children that were killed by people that were illegally in this country.”

“The press doesn’t cover them. They don’t want to,” said Trump.

“We have one young lady whose husband, please stand up…” he asked Marla Wolf, “…her husband was just killed in Maryland.” 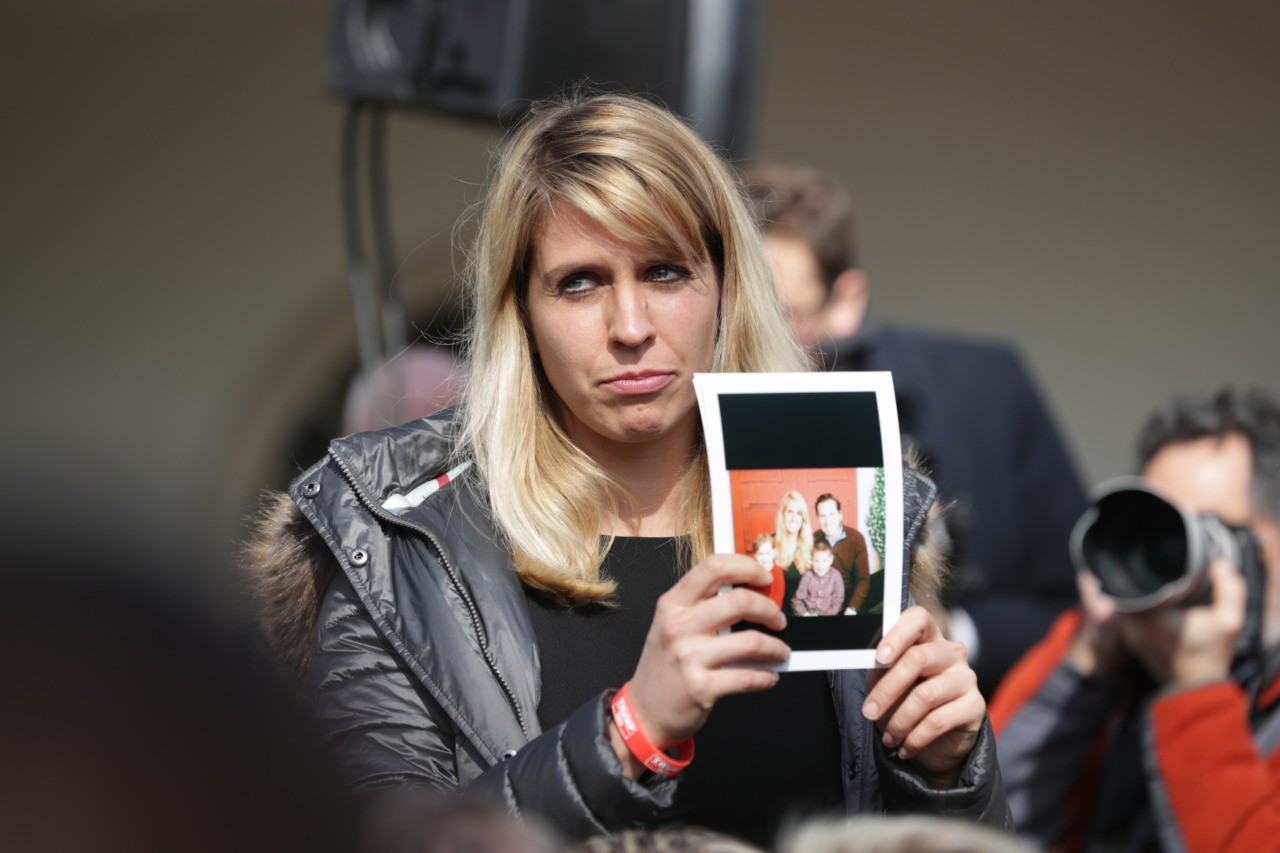 A relative of victim killed by illegal immigrants holds a photo as U.S. President Donald Trump speaks on border security during a Rose Garden event at the White House February 15, 2019 in Washington, DC.  (Chip Somodevilla/Getty Images)

Wolf stood up front the front row, turned around and held up a photo of her husband for all of the crowd, the press, and television cameras to see. Her husband was killed when an illegal alien with a long list of crimes and drug offenses was in the U.S., she said at a Wednesday press conference. The offender has not been deported.

Angel mom Sabine Durden whose son Domonic was killed by an illegal alien, could also be seen in the Rose Garden audience.

He thanked all of the angel families for being there in the Rose Garden, “I want to thank you. Incredible people.”

Many angel families rallied outside the Capitol building on Wednesday before marching photos of their loved ones to the offices of Democrats House Speaker Nancy Pelosi and Senate Minority Leader Chuck Schumer. One family after another recounted how illegal aliens killed their children and siblings and spouses to Schumer’s staff.

The president cited 70,000 Americans at least killed by drugs including meth, heroin, cocaine, and fentanyl. “One of the things that I did with [Chinese] President Xi [Jinping] in China at a summit before I even started talking about the trade…I talked about something more important,” said Trump.

He pointed to the massive amounts of fentanyl coming into the U.S. from China. Trump told Xi he would love for Xi to declare it a lethal drug and put it on their criminal list. The death penalty is an option for offenses on that list.

Trump recalled telling Xi China has a drug problem. He said Xi told him they don’t have a drug problem because they give the death penalty for drug offenses.