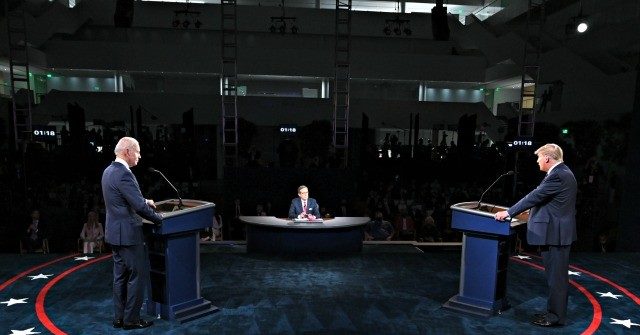 The second debate between President Donald Trump and Former Vice President Joe Biden on Thursday will feature a segment on climate change, but recent polls show voters don’t consider it a top issue.

According to an August 6 Gallup Poll, only 1 percent of those surveyed identified climate change as the most important issue for this election.

A September 16 University of Southern California Poll showed only 4 percent of voters said climate change was the key issue that would guide their vote.

In an October Gallup Poll, climate change ranked 11th out of 16 key issues for voters.

Climate Change is one of six topics debate moderator Kristen Welker, a twice registered Democrat, chose for the debate, drawing criticism from Republicans and the Trump campaign.

“It is disappointing to see debate moderator Kristen Welker list ‘climate change’ as one of the few topics for discussion at the … presidential debate,” Milloy said in a statement. “Despite the issue being discussed in detail at previous debates, polls rank climate change near the bottom of voter priorities.”

“The most recent poll on willingness-to-pay for climate programs reports most voters aren’t willing to pay more than $2 a month more for electricity,” Milloy said. “Even polling done by activist groups shows that almost twice as many voters rank climate as their least important issue (35 percent) versus their most important (19 percent).”

“Americans face a myriad of important issues when casting their ballot,” Milloy said. “Climate change is not one of them.”

The other topics for the debate, which takes place on Thursday at 8 p.m. Eastern Time from Belmont University in Nashville, Tennessee, are “Fighting COVID-19 [Chinese coronavirus],” “American Families,” “Race in America,” “National Security,” and “Leadership.”