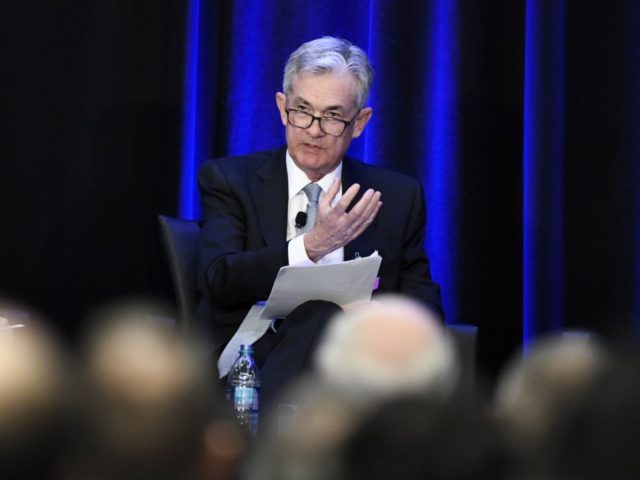 President Donald Trump may want to send Fed Chair Jerome Powell a belated Christmas card thanking him for backing off his hawkish stance on monetary policy.

It was a change of tune for Powell. Less than a month ago, Powell appeared to brush off the downturn in stocks as “a little volatility.”

Friday’s panel appeared to be designed to reassure markets. Powell had remarks written down on a piece of paper despite the informality of the panel setting. That seemed to indicate that he had chosen his words carefully.

“As always, there is no preset path for policy,” Powell said. “And particularly with muted inflation readings that we’ve seen coming in, we will be patient as we watch to see how the economy evolves.”

It worked. Stocks rose sharply after the panel. The Nasdaq Composite, which had been down sharply on Thursday, rose by more than 4 percent.

Friday was Powell’s second attempt to reassure markets and businesses that the Fed would not go overboard in its rate hikes. In mid-December, following the Fed’s decision to hike rates for the fourth time in 2019, Powell sounded somewhat less certain about future rate hikes than he had in an interview in October. That interview with Judy Woodruff is widely seen as sparking the recent stock market volatility.

Trump has been saying for several months that he does not think the Fed should be raising rates. Trump and Fed officials have often appeared to disagree on how fast the economy should be growing. Trump wants it to grow at 3 percent or more for several years. Many Fed officials think the economy has been growing faster than its long-term potential and see their role as creating conditions for a “soft-landing” in which growth falls back toward 2 percent.

But with inflation very low despite extremely low levels of unemployment and stronger-than-expected growth, many now think the Fed should rethink its model. The economy appears to be able to grow at a faster rate and unemployment to fall further than Fed economists thought was possible without inflation getting out of control. This suggests potential growth may be greater than the Fed believed.

Powell’s comments hinted that he may be moving toward that idea–or at least to being patient and letting more evidence come in.

“We will be prepared to adjust policy quickly and flexibly and use all of our tools to support the economy should that be appropriate,” he said.

Oddly enough, Powell was asked if he would resign if Trump demanded it. He said he would not. But after Friday’s comments and the market’s reaction, that scenario now seems even less likely than it ever did.