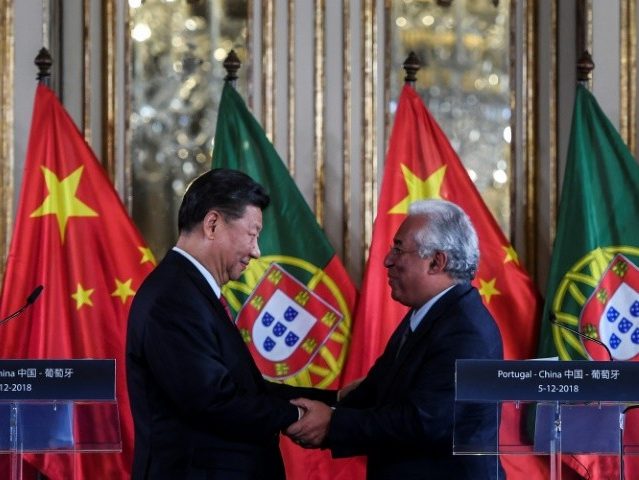 The Prime Minister of Portugal, Antonio Costa, told Chinese Communist Party leader Xi Jinping on Wednesday that his country will “push forward the construction of the Belt and Road” in Europe, China’s plan to control all of the world’s most important transportation hubs.

Xi was in Portugal Wednesday, the final stop on his tour of Iberia and Latin America. Portugal, the easternmost nation in continental Europe, offers China a stable window into the Atlantic Ocean and one of the Eurozone’s weakest economies to prey on. China jumped at the opportunity, signing 17 commercial and diplomatic agreements with Lisbon this week.

Xi and Costa met late Wednesday, the former suggesting the two “increase high-level visits as well as exchanges at all levels and in all areas, and work together to push for more practical results through jointly promoting the Belt and Road Initiative,” according to Chinese state media. Xi called the modern day “the best period in history” between the two countries.

China’s Global Times reports that Costa agreed and will help “jointly push forward” the Belt and Road (BRI) program, stating that “Portugal upholds openness, cooperation, and free trade, and is willing to actively participate in the Belt and Road Initiative.” The BRI “can not only help enhance friendship and cooperation between the two peoples, and promote trade and investment between the two countries, but also help strengthen Asia-Europe connectivity, partnership, and trust,” he allegedly expressed.

BRI, also known as “One Belt One Road (OBOR),” is Xi’s global infrastructure plan. China plans to invest billions in building or renovating the largest ports, roads, and railways in the world, ostensibly as an attempt to rebuild the ancient Silk Road from Beijing to Lisbon. The plan includes projects far afield of that path, however, from illegal constructions in Southeast Asia to colonialist projects in Africa to an agreement with Cuba to expand the “ancient Silk Road” to the Caribbean.

The two nations signed 17 agreements, Portugal’s Diario de Noticias reported, not all related to BRI. Among the topics the agreements covered were “corporate social responsibility … culture, sustainable development, innovation, and R&D.” The Chinese telecommunications giant Huawei, whose CFO was arrested in Canada recently for allegedly violating sanctions on Iran, also signed an agreement with its Portuguese counterpart MEO on the development of 5G technology.

Yet another agreement greenlights the construction of a “Confucius Institute” in Portugal. The institutes have become increasingly unpopular around the world after various countries, including Australia and the United States, found evidence of the Communist Party using them to spread authoritarian propaganda in domestic academic institutions and expand the Party’s global influence.

The Chinese Foreign Ministry expressed great pleasure with the Portuguese visit, particularly regarding the BRI agreements.

“Portugal is an important link connecting the overland and maritime passages of the Silk Road, presenting natural advantages to the Belt and Road cooperation between China and Portugal,” spokesman Geng Shuang said on Thursday. “Portugal has been actively supporting and participating in the Belt and Road Initiative.”

“Now with the signing of the MOU, China and Portugal will strengthen synergy between respective development strategies, expand bilateral trade and investment, continuously optimize and upgrade bilateral cooperation, jointly explore third markets, and forge new growth drivers for cooperation,” Geng added, “so that more practical outcomes could be achieved from China and Portugal’s joint efforts to advance the Belt and Road Initiative and strong vitality will be injected into the China-Portugal Comprehensive Strategic Partnership.”

China is Portugal’s largest trading partner in Asia and aspires to become even more deeply entrenched in its economy. It is far from the only nation in the region that China is courting, however. Xi has expanded his relationships with Europe’s weakest economies, offering an exit from dependence on the European Union. Among the nations Xi has courted in addition to Portugal are neighboring Spain, Greece, and Montenegro, some of the continent’s most indebted countries.

Independent of efforts in Europe, China has found success offering high-interest loans to the developing world and using their debts to establish a permanent Chinese presence there. Sri Lanka was forced to hand China control of a key South China Sea port, the Hambantota port, last year after failing to make its debt payments. The Maldives, not far from Sri Lanka, has revealed itself dangerously close to a Chinese takeover in the latter half of the year following the election of a government less favorable to Beijing.