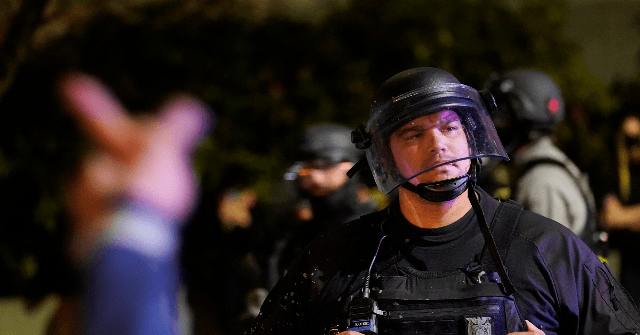 Hundreds of protesters gathered in downtown Portland on Wednesday evening to honor a 27-year-old black man who was shot by police two years ago — an action a grand jury ultimately determined was justified.

Protesters convened in downtown Portland to honor 27-year-old Patrick Kimmons, who died September 30, 2018. According to police, two officers were patrolling an area with suspected gang activity and heard gunshots. Kimmons reportedly shot two men who were in a dispute. Authorities say he pointed his weapon at the officers, which prompted them to issue warnings and fire their weapons when he did not adhere. A grand jury ultimately determined that the officers acted in self-defense and were therefore justified in their use of deadly force.

One activist attending Wednesday’s gathering, Ragina Gray, attributed Kimmons’ death to white supremacy and the “anti-blackness that has existed in this country since the beginning of time”:

Portland activist Ragina Gray falsely claims Patrick Kimmons was murdered because of white supremacy. Grand jury found he was justifiably shot by police for aiming gun at them after shooting 2. Ragina recently claimed she suffers after I posted her mugshot pic.twitter.com/ZIkWdBSb6W

Kimmons’ mother, Letha Winston, also addressed the crowd, stating, “What took me through the wringer is that the police killed my son.”

“I always thought the police were here to protect and serve,” she continued, calling her son a “good man.”

According to journalist Andy Ngo, she also gave a “sexually graphic speech” in the presence of children:

She says it doesn’t matter that her son was a gang member because he graduated high school. He was shot by police after shooting 2 in a gang rivalry & then pointed the gun at first responders, she blames the police and calls *them* the criminals. pic.twitter.com/z8QFbs2xLa

Letha Winston, the mother of Patrick Kimmons, gives a sexually graphic speech at tonight’s BLM-antifa rally attended by families and young children. Kimmons was killed by Portland Police when he shot 2 people & aimed his gun at responding cops. #BLM pic.twitter.com/nY5jxwjs8h

Another video shows activists yelling at nearby hotel guests, who reportedly closed their blinds to the vigil held in the streets below:

Protestors are dedicating this night to Patrick kimmons, who was shot by police in 2018.

#BLM speaker on microphone in downtown Portland is offended nearby hotel guests closed their blinds. The rally is organized in support of violent criminal Patrick Kimmons, who was killed by Portland Police after shooting people. pic.twitter.com/OjEj28sa1F

Activists have taken to the streets of Portland for over 120 days as President Trump has called for law and order in the Democrat-run city.