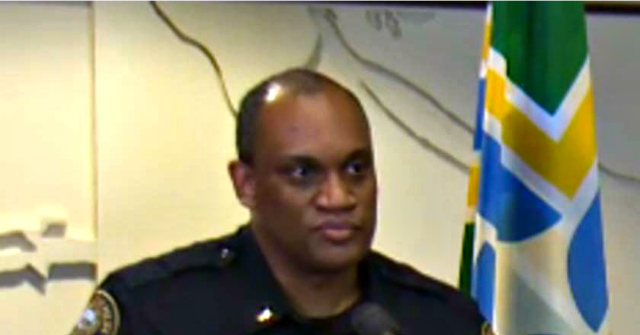 Portland Police Chief Jami Resch stepped down on Monday in a deliberate move to promote a black lieutenant to her position.

Resch, a white woman, resigned after just six months on the job, describing her replacement, Lt. Chuck Lovell, as “the exact right person at the exact right moment” to lead Portland’s police bureau. She reportedly plans to work within the bureau but in a different capacity.

According to ABC News, she pitched the change to Mayor Ted Wheeler (D), who wholly supported the idea.

“We need Chief Lovell’s leadership,” Wheeler said at a Monday press conference. “We must re-imagine reform and rebuild what public safety looks like”:

The fight is against systemic racism within institutions.

I know that together, we will shape a more just and equitable Portland together, and it begins with meaningful and bold reform within the bureau.https://t.co/QrIX8k7BS3

“To say this was unexpected would be an understatement,” Lovell said, adding that he was “humbled” by his new position.

“I’m going to listen. I’m going to care about the community, and I’m looking forward to this journey,” he said.

Lovell served as Outlaw’s executive assistant. Under Resch, he led a new Community Services Division that included the Behavioral Health Unit, the Oregonian/OregonLive reported. The unit’s mission, according to its web page, is to aid people in crisis resulting from mental illness and/or drug and alcohol addiction.

The shakeup follows continuing protests throughout the city, resulting in escalating tensions between protesters and police officers.

Portland rioters set the Portland Police Department and the Justice Center ablaze on May 30. Lawless behavior, including looting, dominated the streets as rioters looted at least $85,000 worth of goods at the luxury fashion store Louis Vuitton alone.

Physical violence also permeated the streets, as a mob reportedly “knocked a man unconscious, then kicked him as he lay bleeding in the street, after he tried to help another man who had been assaulted after bringing the U.S. flag to a Portland protest,” as Breitbart News detailed:

Portland: A man tried to help the man carrying a US flag who was getting beaten on the ground at yesterday’s antifa/BLM riot. They chased him away and kicked him in the face when he was unconscious on the ground: #Antifa #BlackLivesMatter pic.twitter.com/xqKTYT5tPl

Even Wheeler, at the time, addressed the violence ravaging the city.

“Portland, this is NOT us. When you destroy our city, you are destroying our community,” he said.

“When you act in violence against each other, you are hurting all of us. How does this honor the legacy of George Floyd? Protest, speak truth, but don’t tear your city apart in the process,” he added:

Portland, this is NOT us. When you destroy our city, you are destroying our community. When you act in violence against each other, you are hurting all of us. How does this honor the legacy of George Floyd? Protest, speak truth, but don’t tear your city apart in the process.

Portland police have come under fire over their handling of protesters. Things escalated on Saturday, leading to the arrests of roughly 50 protesters outside the Justice Center Saturday night.

The Portland Police Bureau reported that protesters were engaging in criminal activity, detailing behaviors which included “shining laser pointers, using mirrors to direct light at officers, hurling items at officers over the fence including balloons full of paint, [and] full cans of beverages.”

People also attempted to cut the fence or knock it over, and “lit commercial-grade fireworks at officers,” police said. The police bureau said two deputies were injured by a firework tossed over the fence.

Police said they declared an unlawful assembly at 10:50 p.m., and began to arrest protesters who would not disperse after 11:30 p.m. Police said the crowd was fully dispersed by 2 a.m.

Another protest, which spilled over to Monday morning, “resulted in at least 20 arrests, with some demonstrators throwing objects at police, who fired tear gas and sponge-tipped projectiles,” ABC reported.

Objects included glass bottles, hard-boiled eggs, and rocks, one of which hit a medic who was working with the police.

Meanwhile, the ACLU of Oregon has sharply criticized the Portland Police Bureau’s response to some of the protests, accusing officers of being “excessively violent and dangerous.”

“We renew our call to end the use of chemical and impact weapons and flash bang devices against people who gather in Portland. These weapons are dangerous and continue to escalate largely peaceful situations,” it said in a statement, lamenting officers “inappropriately labeling” dissenters “as ‘rioters,’ ‘unlawful,’ or ‘a disturbance’”:

While it is repugnant, it is sadly unsurprising that the Portland Police Bureau’s response to protests against police brutality has been excessive, violent, and dangerous. This has been a longstanding pattern that must end.

THREAD: The @PortlandPolice‘s response to protest has been excessively violent and dangerous.

“We join the protesters in calling for a new approach in our community, and demanding that we uphold the rights of people who have historically had their rights and humanity denied,” the ACLU of Oregon added.