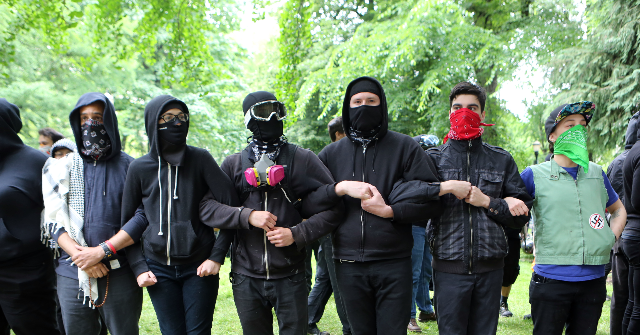 Portland Police Chief Danielle Outlaw is calling for an “anti-mask” law to deter the throngs of Antifa protesters that descended upon the city on Saturday.

“We have to do something differently,” Outlaw said at a press conference for the first time since Saturday’s protests, the Oregonian reported.

“There were entities that planned a brawl in the city of Portland and no one seems to be upset about that. … Entities came here for a fight. … I don’t even know what they were protesting against.” she told reporters.

Outlaw called for a law that would bar demonstrators from wearing masks if they are going to commit crimes.

“We cannot allow people to continue to use the guise of free speech to commit a crime,’’ Outlaw said. “A lot of people are emboldened because they know they can’t be identified.’’

At least 15 states and a few cities and counties have adopted such a law, but most of the laws ban wearing masks with the intent to intimidate others.

Opponents of these anti-mask laws say it restricts people’s freedom of anonymity for expressing themselves at events, such as wearing masks at Halloween parties.

Three people were arrested on Saturday in connection with the violent Antifa protests that took place in Portland, which resulted in journalist Andy Ngo’s hospitalization.

The scene included protesters throwing eggs and milkshakes— some reportedly mixed with dry cement— at police officers and other journalists covering the protest.

Portland’s mayor, Ted Wheeler, kept silent about the incident until Tuesday, when he tweeted several statements about the assaults without condemning or mentioning the Antifa protesters behind the assaults.