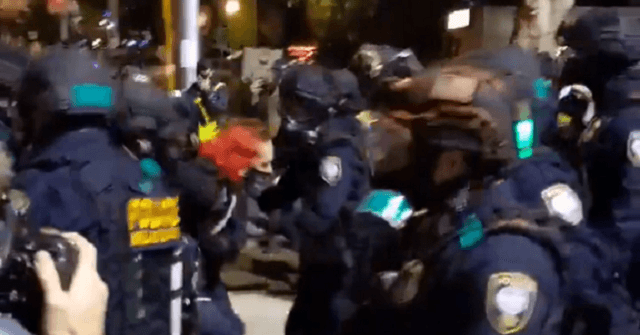 Rioters in Portland, Oregon, gathered outside the U.S. Immigration and Customs Enforcement (ICE) building late Tuesday night. Federal agents moved in and out of the gated facility to push the crowd back and protect the property. Police made multiple arrests.

As protesters assembled around the ICE facility in Portland, federal agents warned them against engaging in criminal activity, according to a video tweeted by journalist Andy Ngo.

BLM-antifa rioters have gathered outside of the Portland @ICEgov facility again tonight. Federal officers give them warnings to not engage in criminal activity. #PortlandRiots pic.twitter.com/d8lPz71Xvw

Agents rushed through the gates of the facility repeatedly to keep the crowd at bay and made multiple arrests.

Fred’s rush out to make arrests. One officer leaves his line to confront legal observers.

Feds are not retreating again. pic.twitter.com/kxdCqyI7e4

Federal Agents and Department of Homeland Security Police officers carry away the arrestees into the ICE facility for processing.#PortlandRiots #Antifa

Eventually, federal agents moved onto the streets to move the crowd back and make more arrests.

Antifa scream and shout as some of them are arrested by federal officers tonight in SW Portland. #antifa #PortlandRiots pic.twitter.com/poeMLgixBC

Ngo tweeted a video of a woman he reports has been arrested seven other times and may have been involved in a previous “statue toppling rampage” in downtown Portland last week.

Tracy Molina was arrested for the 8th time at a violent Portland antifa protest tonight. She has faced no consequences for the 7 other arrests. Last week she was one of the participants of the statue toppling rampage in downtown. #PortlandRiots #antifa pic.twitter.com/wnFMOQUNBQ

Arrests continued until the crowd dispersed.